October 4, 1953 – The 65-foot fishing trawler “Georgene M” ran ashore on the sandy beach behind the Russell Biaggi ranch home in Manchester. The boat, owned by George Moskovita of Southern California, was on her way from Portland, Oregon, to San Francisco to pick up her crew for albacore fishing off the Farallon Islands. Captain A. V. Nelson, alone on the ship, was working on the engines when the boat drifted into shore. 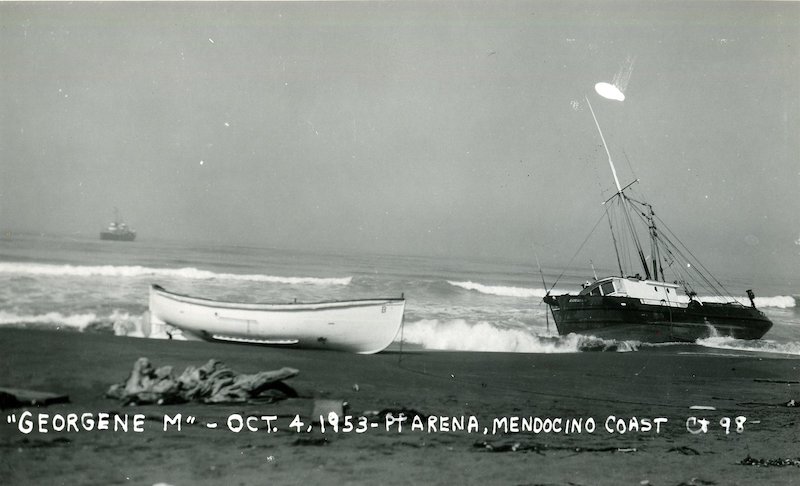 The fishing boat, Georgene M, stranded on the beach at Point Arena on October 4, 1953. (Gift of Emery Escola)

Initially, the newspapers reported that the trawler wasn’t badly damaged, and the Coast Guard vessel Balsam was sent down from Fort Bragg to free the fishing vessel. A coast guardsman swam ashore and hooked a line to the stranded boat, but the five-inch rope broke before the “Georgene M” was moved out to sea. A big tug was also in the vicinity, but these efforts failed as well, and the coast guard abandoned attempts to salvage the ship.

The owner and his brother Jack turned their efforts to recovering equipment from the boat. The Santa Rosa Press Democrat described the recovery, “In order to salvage the engine from the boat, a sand barricade was thrown up. The salvage crew kept a bulldozer busy building up the wall that protected the men working on the beach side of the boat cutting a hole in the hull through which to pull the engine. Since the hull is steel, the hole had to be cut with acetylene torches. The men were able to work only during low tide at about 5 p.m. each day. After it was removed from the boat, the engine was dragged on skids over the beach and dunes to a pasture road, where it was loaded on a truck and sent to San Francisco for an overhaul. Not the least of the salvage crew’s problems was the inaccessibility of the beach. From the nearest road it was nearly a mile across deep sand to where the “Georgene M” was beached. Despite these difficulties the Moskovitas, the skipper, and other helpers succeeded in salvaging radio equipment, nets and other gear as well as the engine from the doomed vessel. However, the radio equipment may have been damaged by the salt water that swept through the boat, Mr. Moskovita said.” Assisting in removal operations were Spud Iversen, Fred Morgan, Dick Connely, Jack Moskovita and owner George Moskovita.