The Kelley House Museum is proud to present current, online and in person exhibits. Each one contributes to the rich history of the Mendocino Coast. 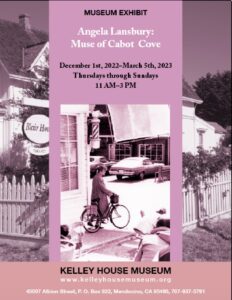 Visit the Kelley House Museum and celebrate Angela Lansbury, the beloved actress known for her prolific career in theater, movies, and television, who passed away recently at the age of 96. The exhibit explores Lansbury’s illustrious life and career, in particular her role as the charming sleuth, Jessica Fletcher, in Murder, She Wrote. The iconic TV series was filmed during the ‘90s in Mendocino (which doubled as the fictitious town of Cabot Cove). Lansbury was nominated 12 times for an Emmy Award (though shockingly she never won). The show had a significant impact on Mendocino’s economy, employing residents as extras and generating revenue for local businesses. People still come here to see Jessica Fletcher’s house. Enjoy vintage photos of the actress on set and in candid conversations with folks around town. See what a “shot list” looked like. Leave a note on the tribute wall where visitors’ stories and memories of Angela Lansbury will remain for the duration of the exhibit. Most of all, the exhibit honors Lansbury for the generosity and kindness she showed to the people of Mendocino. 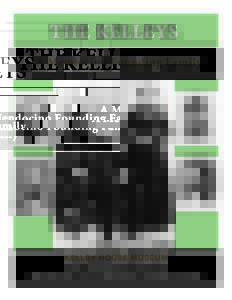 Meet the Kelley Family: parents William and Eliza, and their four children, Daisy, Russell, Elise, and Otis, along with their extended family. A beautiful, hand-embellished family tree helps visitors understand their relationships to each other. Among the exhibit’s highlights is a one-of-a-kind scrapbook with postcards, clippings, snap shots, and other memorabilia that reveal scenes from the family’s everyday life. 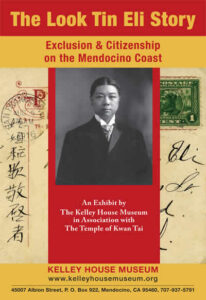 The life of Mendocino-born visionary Look Tin Eli was one of national significance. As a teenager returning home from China in 1884, his illegal detention instigated a court battle, culminating in the state’s legal precedent granting full citizenship for all native-born Californians. This story, which starts with one man from a small coastal town, will take us from frontier California into the mid-twentieth century and illustrates the struggle for full citizenship by Chinese and Japanese immigrants. 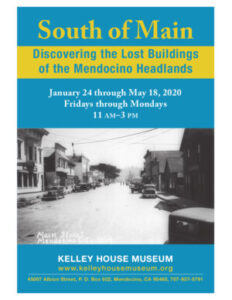 Once a coastal prairie, then a bustling rail and lumberyard ringed by stores and houses, the south side of Main Street in Mendocino is now devoid of buildings. This exhibit uses historic photos and Sanborn Fire Insurance Maps to reveal the 20 buildings that used to line the south side of the street, including a jewelry store, Chinese stores, dwellings, a post office, and meat market. 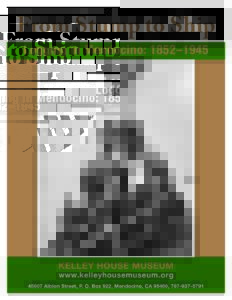 The California Gold Rush of 1849 created a building boom with lumber needed for houses, bridges, mining structures, and fences.  The size of old growth redwood trees, which are among the tallest on earth, made them prized timber. This slideshow explains how a tree was felled, milled into lumber, and then loaded onto ships that carried it to all parts of the world during Mendocino’s early years.

From Stump to Ship Slideshow

Because of the historic nature of the Kelley House, there is no elevator to the second floor. We asked students from Mendocino High School’s tech department to create a virtual tour so that those who aren’t able to access the upstairs exhibits can learn about the treasures within the Kelley family members’ bedrooms. We hope you enjoy their work and appreciate the interest they took in this project. 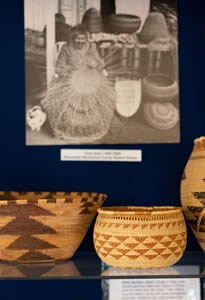 Pomos lived along the Mendocino Coast for thousands of years prior to European settlement in 1850. On loan from the California Indian Museum are six examples of decorative gift and utilitarian baskets belonging to the Daisy Kelley MacCallum Collection. 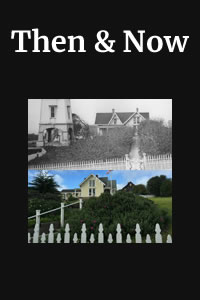 Then and Now Photo Exhibit

“Then and Now” exhibit portrays the town of Mendocino and its surroundings by comparing scenes photographed approximately 100 years apart. The original photographs, taken by local, amateur photographer Perley Maxwell, were printed by the 2002 Mendocino High School photography class. The students then took modern day digital images of the same locations. These revealing images show how things have changed and how some things may never change. 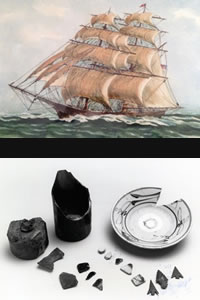 In 1850, the Baltimore-built Clipper Frolic, en-route to Gold-Rush San Francisco from China, wrecked on a reef just north of today’s Point Cabrillo Light Station. Her story is among the most fascinating in California shipwreck history and is called “the most significant shipwreck on the west coast” by historians. Artifacts and interpretive materials from the shipwreck of the Frolic are on permanent exhibit.

We invite you to check out our online book store with over 30 titles devoted exclusively to Mendocino’s fascinating history.