October 2, 1877 – A destructive fire burned near the Garcia Mill, about six miles from Point Arena. According to “Mills of Mendocino County,” this mill was built in 1869 and “had a double 60-inch circular saw, a 48-inch pony saw, an edger, 2 trimmers, a slab saw, a picket saw, a siding saw, and 3 planers worked by about 150 men. A 6-mile long flume, 30 feet wide and 16 inches deep, carried ties, and later lumber, from the mill to the sorting yard in about 4 hours.” 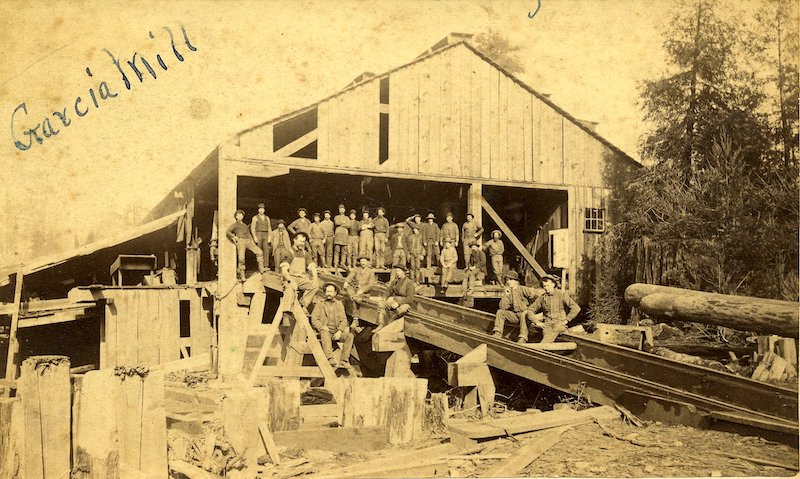 The Beacon reported that, “the fire on the south side of the river swept across near the mill and spread with fearful rapidity up the North Fork, burning the flume and the residence of Tom Kelton. The mill of Nickerson & Co. and the little village was threatened with entire destruction, and it was almost by superhuman efforts that the fire was got under control. All of the families moved out their furniture on the bed of the river. Captain Nickerson with the gallant crew of men in the employ of the company have been working day and night to save property. The fire is coming down the river on the north side with a strong wind in the north. The Garcia hotel and mill are out of danger at the present time, the fire having burnt within a few feet of the hotel, and the mill caught fire three or four times during the conflagration of immense trees and undergrowth near by. Capt. Nickerson informs us that the damage to timber will be very great, the full extent of which cannot be ascertained for several days.”

The Garcia mill and hotel survived this fire, but weren’t so fortunate in 1894, when the Fort Bragg Advocate and News reported, “The forest fires that have been raging some time, destroying large quantities of ties and bark, reached Garcia, six miles from Point Arena, Wednesday night, burning the lumber mill, hotel, store and storehouse. The contents of the buildings were all destroyed.”