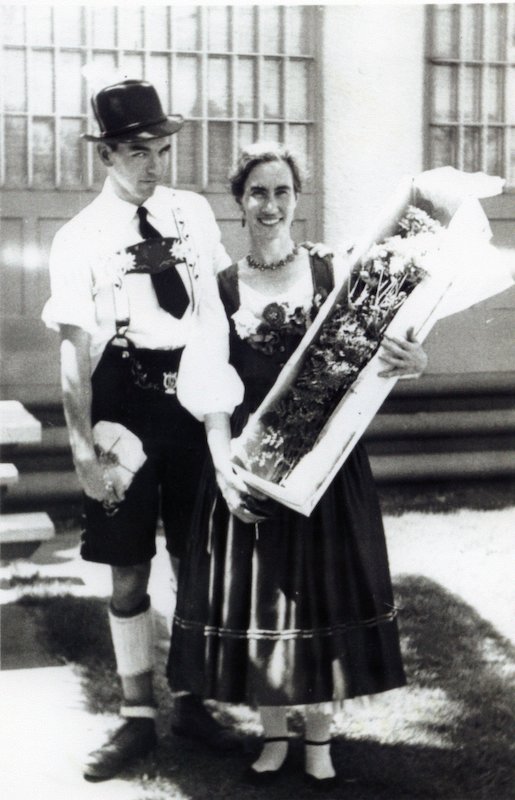 Grace West and Friend, July 1950. Grace West dressed in a German folk costume, posing with an unidentified friend. Grace owned The Music Box on Main Street in the 1960s, a music store and dance space with a small restaurant on the ground floor.

December 14, 1963 – Julian White, composer and pianist of renown, performed at the Music Box on Main Street. According to the San Francisco Chronicle, “Mr. White was born in Chicago in 1930 and began piano lessons at 5. He studied at the Juilliard School in New York,” and moved to Berkeley in 1958.

At the Music Box that evening, Julian played “the historic Chickering concert grand which is gradually being restored to something approaching its former outstanding quality,” according to the Mendocino Beacon. “The privilege of hearing Julian White play in the intimate surroundings of the Music Box is one to be cherished and music lovers of the area will be quick to realize it. The audience is asked to come early so that the mood of the evening and the complete enjoyment of this rare treat will be as undisturbed as possible.”

The Music Box was owned by Grace West, who later married Don Frye. Together, they established a music store with a small restaurant on the ground floor. In addition to their small concert hall and theater, they provided dance space for young people on Friday nights. Don and Grace also gave music lessons, and Grace published “The Mendocino Robin,” a local magazine that grew to be a 30-page monthly filled with stories, poetry, music, graphic art, and all manner of things artistic and cultural.