December 12, 1945 – The remains of the Mendocino Mill on Big River Flat burned to the ground at 3am. 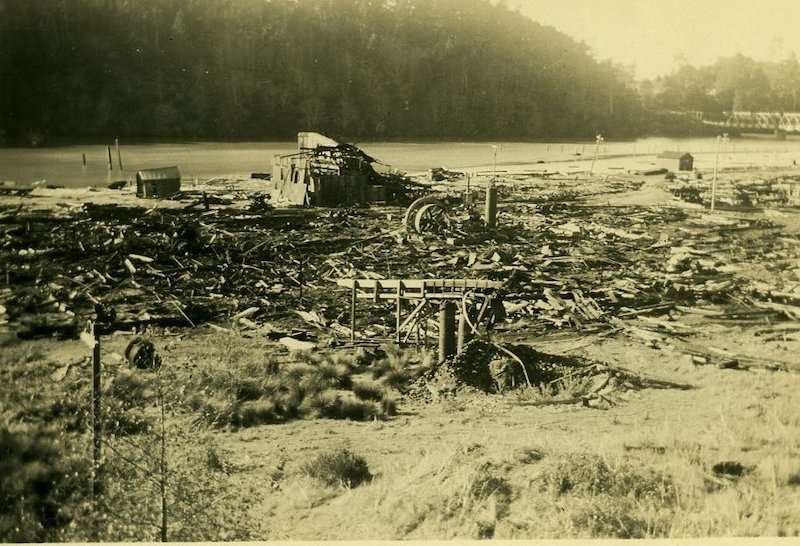 Built on the site of the second Mendocino sawmill (which had also been destroyed by fire), the last Mendocino mill was two stories tall with saws on the second floor and the planing mill on the ground floor. This mill operated, with occasional temporary shutdowns, from 1865 until the Great Depression. There was a 3-year shutdown from 1931 to 1934, and from 1934 to 1936, the mill operated only intermittently before being shuttered.

In August of 1938, the mill reopened one last time. A large raft of logs being towed from Washington State to San Diego had broken in half off the coast of Mendocino. The logs were a hazard to ships, so the broken raft was towed to Mendocino Bay. The mill sawed the logs salvaged from the raft and the few logs left in the Boom, before the final shutdown on November 30.

Harrah Brothers Machine Works of Willits purchased the mill in January 1945. The Mendocino Beacon described their loss, “The mill was being dismantled by Joe Harrah from Willits, and he had been more than cautious about fire. He had taken most of the machinery out of the mill but there still remained a quantity of valuable equipment. Mr. Harrah was at Willits, but came over as soon as he was notified of the fire. He had a quantity of new parts in the old storehouse, which was destroyed. The south side band mill along with several new saws was burned. The big engine with flywheel, etc. is ruined, the fire room, although covered with sheet iron, was gutted by the fire and collapsed over the boilers.”