The Mendocino Beacon reported that the ringing of the fire bell early in the evening “brought practically the entire population of Mendocino out of doors. To the relief of all, however, no mounting flames met their eyes, the blaze being extinguished within a few minutes after its discovery. The fire occurred at the Presbyterian parsonage, the home of Rev. and Mrs. H. P. Ingram. It seems that their chimney had burned out a short time before, and the sparks must have ignited the roof of the building. Can, the cook at the mill, noticed the shingles burning as he passed by and gave the alarm. The blaze was quickly put out by fire extinguishers, taken from the fire engine house. A hole burned through the roof and ceiling of the house is about all the damage that resulted. Mr. and Mrs. Ingram were not at home when the fire was discovered, being at the Baptist church, where the Presbyterian services were held that evening.”

Known today as the Eidsath House, the Mendocino Presbyterian Manse was constructed in 1908, following the loss of the previous church parsonage. That home, built by Jerome B. Ford before 1862, was located on the south side of Main Street, west of the Ford House, and burned to the ground in 1901. 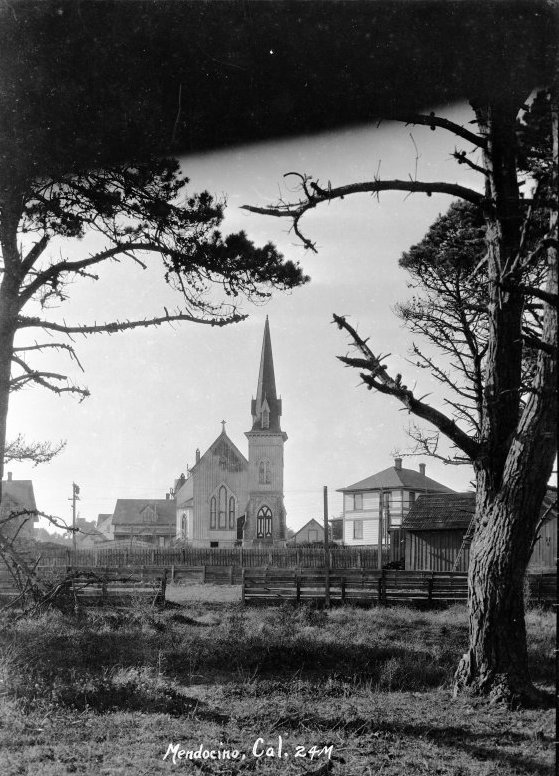 Mendocino Presbyterian Church, 1935-1940. View of the Mendocino Presbyterian Church looking north between 1935 and 1940. To the right of the church is the two-story Manse, which was the residence of pastors and their families. It is also known as Eidsath House, in honor of the Reverend S. Martin Eidsath. To the left, behind the Church, is the David F. Lansing House on Main Street. On the far left side of the image is the eastern side of the William Norton residence, which would later be demolished and replaced by a gas station on Main Street. The Lansing barn is visible behind and to the right of the church. The fences in the foreground enclose the tramway that brought lumber products from the Mendocino Mill on Big River Flat out to the Shipping Point on the Mendocino Headlands. (Gift of Dot Johnson, Photographer: Everett Paul Racine)

The Ingrams were new to the area, having arrived from Gilroy the previous spring. The Beacon described Rev. Ingram as “a forcible speaker and a man of pleasing personality.” He served the local church for over five years. In January 1922, Rev. Ingram retired from the ministry, and he and his wife moved to Palo Alto to be closer to their grandchildren.

The manse continued to house the church’s pastors and their families for many years. From 1978 to 1987, the Mendocino Community Library operated here. Today, the Eidsath House is the home of administrative offices and meeting rooms.