The Kelley House’s new exhibit, Angela Lansbury: Muse of Cabot Cove, is a tribute to the beloved actress and her impact on Mendocino. The exhibit examines her illustrious life and career, in particular her role as Jessica Fletcher in “Murder, She Wrote.” The iconic TV series had an impact on Mendocino that ranged from hiring locals for the filming to boosting tourism. Most of all, the exhibit honors Lansbury for the generosity and kindness she showed to the people of Mendocino.

In Lansbury’s prolific career, she starred in 60 films, 49 movies and television shows, 21 stage productions, 2 radio shows, and 2 video games (voicing the sentimental teapot, Mrs. Potts, in a couple of Super Nintendo’s “Beauty and the Beast” games). Born in London in 1925, she and her family came to the United States in 1940 to escape the blitz. When she was 17, she landed her first film role as the nasty young maid in “Gaslight,” with Ingrid Bergman and Charles Boyer.

As unpleasant as her character was in that nail biter, the real Lansbury was known for her compassion and humility. Fans and co-workers alike spoke of her with admiration; and in all the taped interviews she did, Lansbury was a down-to-earth person. When she died last October, many of her colleagues in film and theater paid tribute, including Lin Manuel Miranda, who wrote: “Angela Lansbury…a consummate professional, a talented actress, and a lovely person.” 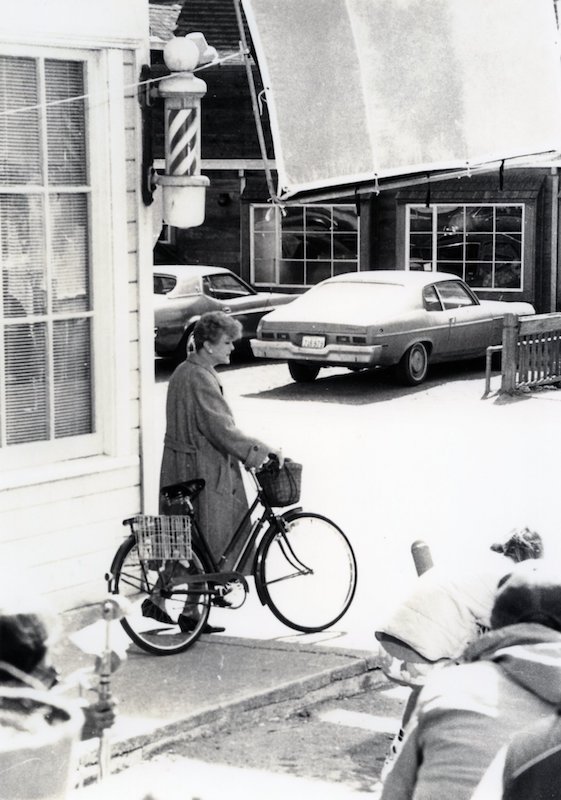 Angela Lansbury in the role of Jessica Fletcher while filming “Murder, She Wrote.” She is standing under the barber pole at Mitch’s Barber Shop on the corner of Lansing and Ukiah Streets.

The majority of items on display at the Kelley House are behind-the-scenes photographs from the filming of “Murder, She Wrote.” They were taken by Wally Smith, a local who often appeared as an extra in the show (he also got to speak a line in “The Haunting of Seacliff Inn”). Mendocino locals were often cast as extras in the show, and several appear in the photographs. Another shows local film coordinator, Toni Lemos, chatting with Lansbury. She and Lansbury became good friends. Lemos worked not only on “Murder, She Wrote,” but on dozens of other movies, shows, and commercials for decades. Toni began her work in the film industry when she was hired as the stand-in for Joan Fontaine in “Frenchman’s Creek” in 1943 and continued to work in the field into the 1990s before passing away in 2008.

Interestingly enough, Lansbury’s mother, the Irish actress Moyna Macgill, made a film on the Mendocino coast long before Lansbury set foot here. Macgill appeared as Lady Godolphin in “Frenchman’s Creek” in 1944, a swashbuckling adventure filmed on the Albion River and in its harbor, in which an aristocratic English woman falls hopelessly in love with a French pirate.

“Murder She Wrote” aired for 12 years from 1984-1996, and was the first successful crime drama with a woman as the lead. Not only was the lead a woman, but an older woman! Lansbury was 58 years old when she began the series. As the years went by, she gained more creative influence and eventually became an executive producer. She co-owned (with her husband, Peter Shaw) Corymore Productions, which co-produced the show with Universal Studios.

Part of the exhibit is a wall on which visitors can share their stories about, and memories of, Angela Lansbury and the filming of “Murder, She Wrote.”

Angela Lansbury: Muse of Cabot Cove is on display from December 1, 2022 until March 5, 2023. The Kelley House Museum is open from 11AM to 3PM Thursday through Sunday. Walking tours of the historic district depart from the Kelley House regularly:Tour Schedule