December 6, 1889 – Charles C. Luiz was born in Mendocino. His parents, Antone and Annie Lazarus Luiz operated the Lisbon Hotel on Ukiah Street until they sold the property in 1906, and Charles attended Mendocino schools. Antone also ran a general merchandise store on Main Street, in the building where Highlight Gallery was most recently located. After Antone retired in 1909, Charles opened a clothing shop called the Toggery in this location.

Charles married Ella Gordon, eldest daughter of John and Annie Gordon of Little River, at the Mendocino Presbyterian Church manse in 1911. The Beacon described the ceremony as a beautiful and quiet service, “standing before the fireplace in front of a bower of green in the cosy and tastefully decorated and brightly lighted manse parlor. […] The bridal gift of the groom to the bride was a beautiful and costly diamond ring, which was appropriately consecrated in the marriage service.” 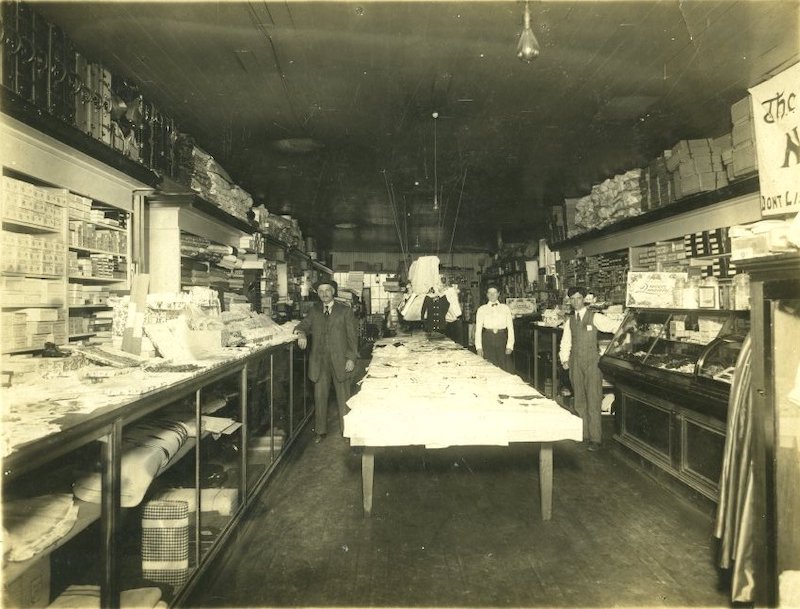 Inside the Toggery, 1911-1924. Antone Luiz with his daughter-in-law, Ella, and his son, Charles, in the Toggery. Electrical light bulbs hang from the ceiling on wires. Glass display cases flank both side walls. A long table extends down the middle of the space. Shelves on both sides are stacked with dry goods. The end window has many panes of glass.

Together, Charles and Ella operated the Toggery. In December 1916, the Beacon reported that the store specialized in “fine wearing apparel for women and a complete line of gent’s furnishings. They have just received some upholstered chairs and other artistic furniture which you would do well to call in and see.” Charles and Ella had two children, Juanita and Malcolm.

In 1924, they sold their store to H. R. Ferrill, and the Luis family moved to Oakland, California.