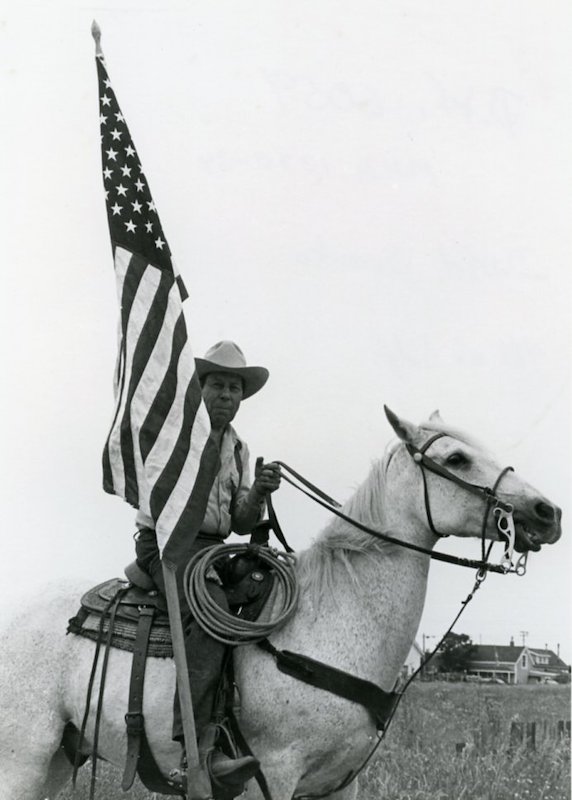 Author Dave Sverko riding his horse and carrying the American flag during the Fourth of July parade of 1976 in Mendocino, California. (Gift of Bill Wagner)

When I was about 13, I went to work on the Woodward Ranch, which took in all the area where the Mendocino Coast Hospital is now, as well as the Redwood Health Club and what was later Bolden’s Dairy. They had an extra cabin on the place and I stayed there.

There was an old crooked road from the ranch that came out on Harrison Street and, on school days, I ran that road in the mornings and again back in the afternoon. When I graduated high school in 1934, I bought a cheap saddle, a horse, a rundown 1931 Chevrolet that barely held together, and I worked for several ranches. I started shoeing horses too; I got $2 per horse.

In the ‘30s and early ‘40s there were about a hundred head of mixed stock running on Big River from what was called the “potato patch,” where a man named Hakey Warner had lived at one time. He was no longer there, but corrals were there that we used to work cattle. They were pretty wild and hard to handle.

To get down to the river from Little Lake Road, we took the road that now goes by Ames Lodge, which was called the “Boom Road.” Joe Quaill, who had a meat market on the south side of Main Street at the junction with Kasten Street, owned most of the stock. He also had a slaughterhouse on Little Lake Road, later the Leek property [on the north side of the road between Blair and Wheeler Streets].

The only road to the river you could drive a truck on was Big Hill, now a state forest road. When Joe Quaill wanted meat for his butcher shop, he would hire four or five of us—Sam Costa, Johnnie Costa, Joe Golgert, Dave Barr, and myself. Joe would drive his truck down to the mouth of the Little North Fork, where each of us roped a cow or steer fat enough to butcher, tied it to a tree, and then helped to load it on the truck. It usually took all day Saturday and Sunday to get it done.

A few years later Joe leased the Hargrave Ranch north of Russian Gulch [about where Point Cabrillo Drive leaves Highway 1 heading north] and decided to get all his cattle off Big River and up there. He hired several of us and we rounded up about 60 head. Joe figured to drive them up to Little Lake Road, down to Lansing Street (then the highway), and up the highway. We started the cattle at one of the corrals at Hakey Warner’s and we drove them up the Big Hill Road.

I asked Joe Golgert, “Who is going to ride ahead of the herd in the traffic?” He said, “There ain’t no g.d. traffic and, if there is, they can get out of the way.” We met only one car on Little Lake Road and that wasn’t bad, but when we got to downtown Mendocino, where we had to turn north on Lansing Street by the cemetery, the road was oiled. Quaill yelled, “You have to get up ahead,” but when the cattle hit the oil, there was slipping and sliding and 15 or 20 of them went down.

When we got to the side of Agate Beach, a big yearling heifer was crowded off the bank and went down the bluff about 25 or 30 feet, just above the ocean. Quaill said we’d have to come back for that one, but I said, “By that time, it will be in the ocean.” It’s a good thing I was riding Babe, and had her well trained. I got a rope on the heifer and with Dave Barr’s help, got it back up the bank and together with the rest of the herd.

The only cattle left then on Big River belonged to Eaton Grimes, a superintendent for the Union Lumber Company who lived in the Ford House on Main Street. In 1948, the lumber company made Big River into a tree farm and all the livestock from the company ranch (last occupied by the Piccolotti family) down river had to be removed. I took on the job for Grimes and, with good horses and dogs, had the work done in two weeks. Eaton and Pat had bought the Hoak Ranch in Comptche and he hauled the 30 head from the river out there.

It was tough work, and hard on horses, but a lot of fun when you’re young!

This Kelley House Calendar ran in the Mendocino Beacon on November 25, 1998; we reprint it here because it’s so exciting. If you would like to share a rip-roaring memory about your life in Mendocino, please contact Marguerite O’Brien at curator@kelleyhousemusuem.org or call (707) 937-5791. The Kelley House Museum is open from 11AM to 3PM Thursday through Sunday. Walking tours of the historic district depart from the Kelley House regularly.