January 16, 1968 – The Tuesday Evening Bridge Club celebrated its 39th anniversary at the home of Kate Anderson on Pine Street. Kate, who was 85 years old, was assisted in her hostess duties by her daughter, Lucille Freathy. 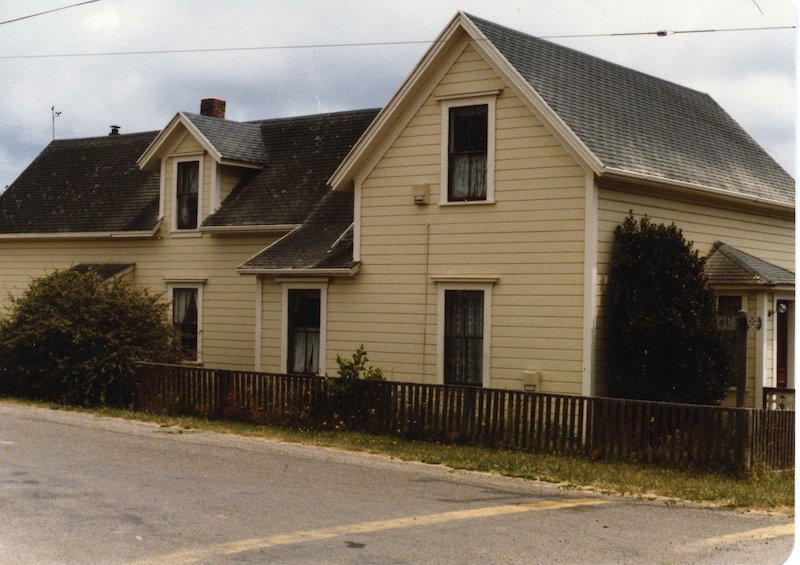 North elevation of the Packard-Johnson House on Pine Street looking southeast. Master carpenter J. D. Johnson began building this house in March 1891 for the Justin Packard family. However, Packard left that same year to return to Maine, and Johnson bought Packard’s properties including this house for $5,500 at auction. Louis and Kate Anderson purchased this house, which had been used as a rental property for many years, from the Johnson estate in 1936 for $1,000. After Kate’s death in 1969, it again became a rental. The Packard-Johnson house with its relatively unaltered structure is a Category One historical structure and a good example of Mendocino architecture built by a local Mendocino builder.

Kate was the founder of the pleasant social group. The first meeting of the bridge club was held in January 1929 at her previous home on Ukiah Street, where Cafe Beaujolais is located today. Meetings rotated between the homes of the club members.

There were three other charter members of the 12-member club still playing in 1968: Dora Doolittle, Edna Jackson, and Eleanor Smith. According to the Beacon, “Reminiscence during the festive evening included the pleasant parties in years gone by, and the husbands’ nights frequently held, at which dinners were served. On husbands’ night when more room was needed, club rooms were rented on the south side of Main Street, where the Study Club met at that time. That portion of the community is completely changed now, they remembered, since 1929.”

Almost four decades later, the ladies were still having fun at their monthly club meetings. “Luscious dessert was served at Tuesday’s celebration and laughter filled the air. The friendly game of cards was thoroughly enjoyed with high scores won by Della Hayter, first; Ann Valentine, second; and Edna Jackson, third. Hostess for the February meeting of the Tuesday Bridge club will be Edna Jackson.”