And Then Their Luck Ran Out by Louis Hough

And Then Their Luck Ran Out by Louis Hough

Part 3 of our “dark and stormy night” series, this article continues the story from last week’s column and first appeared in the Mendocino Beacon on December 6, 2007

When we left the storm-battered little steamer Pomo, she and her rescue boat, Adeline Smith, were waiting to cross the treacherous seas at the bar to San Francisco Bay on the night of January 2, 1914 [the sand bar was not yet dredged to the comfortable depth it is today.] In the darkness of the rainswept night, the hawser broke and Pomo drifted off from Adeline. Captain Lilleland, certain that she would capsize, ordered all hands to abandon ship. They lowered two boats into the Stygian blackness, and dressed in life jackets (which some kept as souvenirs), the crew members began pulling for Adeline with every sinew. Not a minute too soon had they left their battered vessel: Pomo keeled over and floated away behind a curtain of rain.

With the survivors and their boats safely aboard the Adeline, Captain Olson began to chase the overturned prize, out there somewhere, drifting toward shore. There was little time to find and lasso her before she grounded. Adeline, with her large lumber cargo, was no nimble rescue tug for she too wallowed in the turbulent seas. Complicating the task was that Pomo had turned turtle [upside down]. It took several hours, but by extraordinary seamanship, grit and perseverance, the hulk was again secured and taken in tow.

It was now after daylight Friday, the third day of the struggle. Upside down, Pomo was even harder to manage, but with luck the line would hold and the water at the San Francisco bar subside. Driving steadily forward, Adeline was making headway, but fuel had become a serious concern. Could they keep at it much longer? Both skippers had done superbly against enormous odds, but they needed some luck.

Hope was shattered when the towline snapped and Pomo slipped away again. There was too little sea room in which to maneuver. All those tired men could do was watch while the wreck was driven toward shore. When she reached Limantour Beach in Drake’s Bay, her two masts snagged the bottom, she flipped back over and topside up, and ground into the sand.

Olson abandoned further notion of salvage and Adeline proceeded into the bay, docking at Oakland mid-morning on Saturday, January 3, 1914. His officers and crew were elated over their life-saving efforts, but Captain Olson was frustrated: more than 72 hours of gritty work ended without a salvage award.

An investigation was held the next week by the Steamboat Inspection Service at which Chief Engineer O.F. Anderson, First Mate Heleste and Second Mate Johnson of the Pomo testified that “something was wrong” with the hull. They asserted that the ship was rolling with unusual violence shortly before she began to leak. Captain Lilleland refuted their claims, testifying that the hull was sound, and the very men conducting the hearings had inspected it only three weeks before. It was concluded that the “ripsnorter” storm was largely to blame. 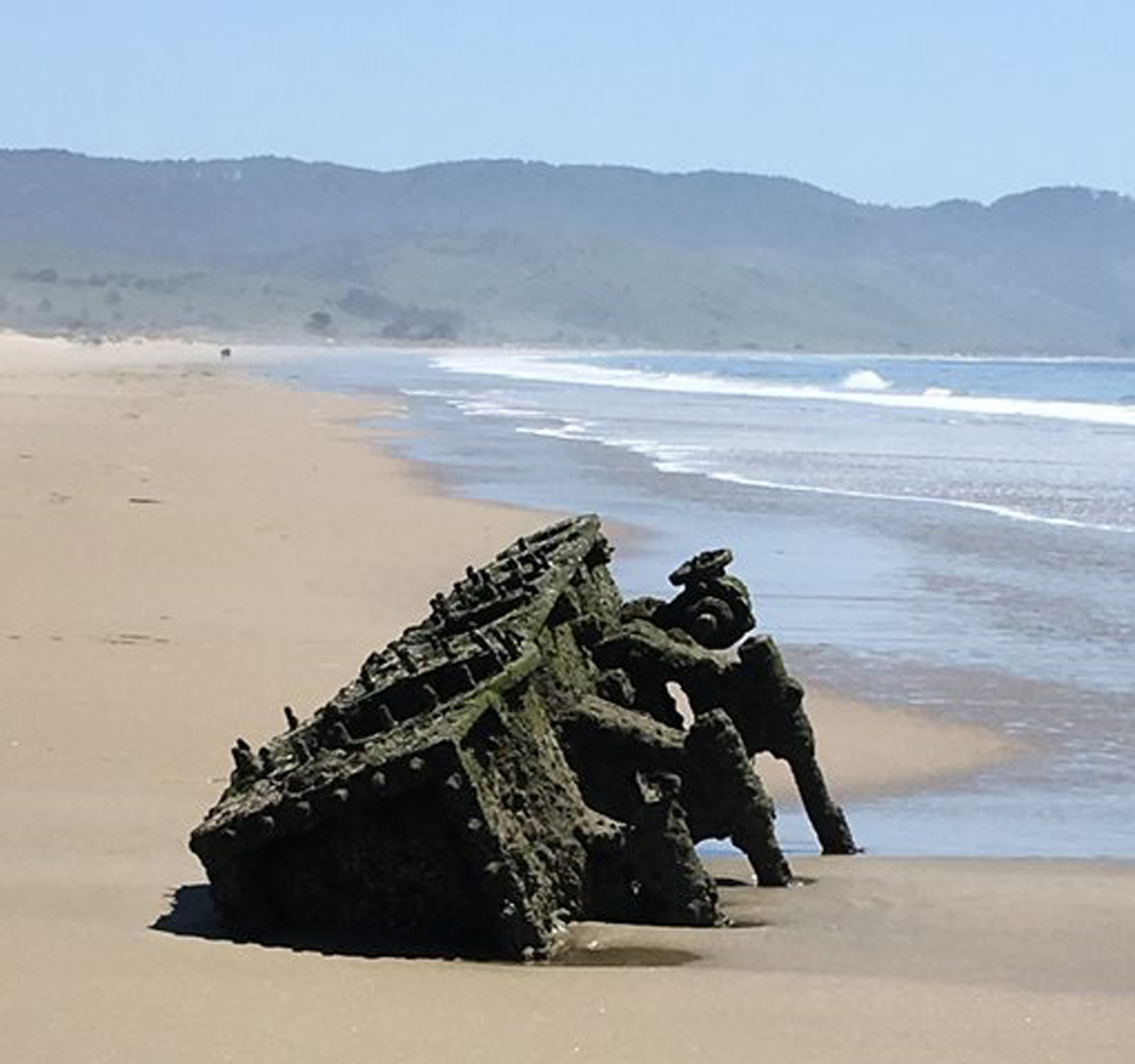 Pomo’s triple expansion steam engine appeared out of the sand at Limantour Beach in April, 2017.

Further salvage efforts proved fruitless and were abandoned. Pomo disappeared under the sands and remained lost from view until her bones were discovered in 1982 in an electronic sweep of Drake’s Bay conducted by researchers from Texas A&M University in collaboration with the National Park Service. The Pomo skeleton was in good company in Drake’s Bay: the researchers estimated that more than 60 ships have sunk there since Sir Francis Drake is thought to have landed there more than 400 years ago. [Editor’s note: In April of 2017, the Pomo’s triple expansion steam engine appeared out of the sand at Limantour Beach, and people familiar with the beach said it surfaces periodically and then disappears again.]

The Kelley House museum is open from 11:00 AM to 3:00 PM Thursday through Sunday. Walking tours of the historic district depart from the museum regularly. If you have a question about Mendocino history, contact the curator at curator@kelleyhousemuseum.org