Wasn’t That a Mighty Storm by Louis Hough

Wasn’t That a Mighty Storm by Louis Hough

Given our recent weather, we’re continuing the “dark and stormy night” theme from last week with this article that first appeared in the Mendocino Beacon on August 30, 2007.

Captain Orlando “Ole” Lilleland was master of the wooden steam schooner Pomo, which operated along the Mendocino coast hauling redwood and farm goods south and general freight north. Pomo was of modest size, built to be handy in narrow harbors and dogholes such as the one at the mouth of the Albion River. She departed from Albion for San Francisco at noon on Tuesday, December 30, 1913, laden with lumber, some produce, 20 crew members, and four passengers. 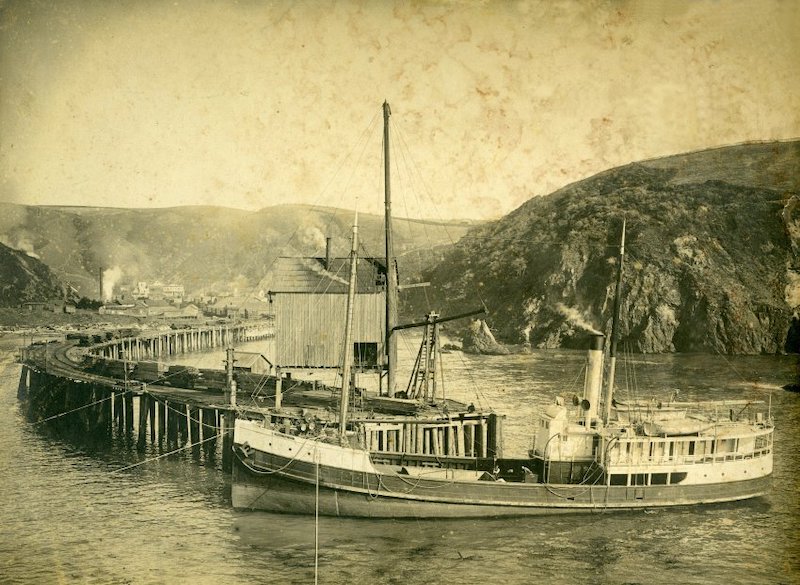 The Pomo at the Albion wharf

Pomo made fair progress until nightfall when a severe gale kicked in. The seas grew higher, the waves steeper, the driving rain and fog obscured all visibility. By midnight, the sou’wester had reached hurricane velocity and Pomo started pounding herself to pieces, plunging and rolling violently. Her planks groaned against each other; seams opened and seawater spurted into her hold. Water rose relentlessly, mocking the futile work of the pumps and threatening to breech the fire room bulkhead. Chief Engineer O.F. Anderson and his men worked in waist-deep water, struggling to strengthen the weakened wooden wall. Men wrestled with timbers and canvas, but they could not stay the force of water pressing against the bulkhead.

By three o’clock that morning the battle was lost. Pomo’s fires were drawn down to prevent a boiler explosion and her engine wheezed to a mournful halt. She lost steerageway and veered off to wallow in the troughs, a dead hulk. An immense roller heaved her over and the lumber on deck went overboard, taking with it part of the deckhouse.

Captain Lilleland and the people with him had only one choice: stay with their ship, though she “sank to her rails and the waves washed over her in huge masses of water.” Huddled together, each man knew the lifeboats were of no use; they would never survive in such seas. One hope was to call for help; Pomo had no radio, but she had signal rockets.

At about 4:00 a.m. the glow of a flare was seen through the murk by a lookout on the lumber steamer Adeline Smith. Captain Bror W. Olson, skipper of the big steel steamer, was a veteran of many successful salvage operations, all but one conducted from his own vessel. He had little time to survey the situation before committing his heavily laden vessel to rescuing the little Pomo.

Adeline’s men were poised with a heaving line. A powerful mate hurled it through the driving black rain. Pomo’s men grabbed it and pulled. Fastened to the heaving line were a stout bridle and a towing hawser, which they secured to the fo’c’sle bitts and foremast.

Despite her lamentable state, the little steam schooner was a valuable prize. She and her cargo (what was left of it) were worth a great deal to her owners. One report valued the vessel at $75,000 and the cargo at $12,000. Adeline saw this as a profitable undertaking—a handsome cash award awaited them for a successful rescue. That meant hauling the hulk, with its crew and passengers still aboard, 50 miles to the safety of San Francisco Bay through a wicked storm.

The waterlogged wreck was not easily managed in turbulent seas. It took almost 48 hours, much of the time at full throttle, but early Friday morning, January 2, Adeline hove-to near the San Francisco lightship. Seeing the condition of the bar, Captain Olson reckoned it too risky to pull Pomo into the bay. Treading water, burning fuel, he waited for “conditions to moderate.”

The Mendocino Beacon called the storm a “ripsnorter.” Three inches of rain fell in 24 hours, slides closed the California Western railroad right-of-way, a tunnel collapsed on the Caspar line, and electric power went out all across northern California, as did telephone and telegraph service. Not one ship would venture out from San Francisco into that savage sea. Out there in that ripsnorter, Pomo and Adeline stuck it out, even when the lightship broke her moorings.

The Kelley House museum is open from 11 AM to 3 PM Thursday through Sunday. Walking tours of the historic district depart from the museum regularly. If you have a question about Mendocino history, contact the curator at curator@kelleyhousemuseum.org