January 10, 1909 – Joe Lenhares married Mamie Jerome at the Catholic Church in Mendocino. Mamie was the daughter of Portuguese immigrants, Antone and Annie (Thomas) Jerome. She was born in her parents’ home on the northeast corner of Calpella and Williams Streets in 1887. 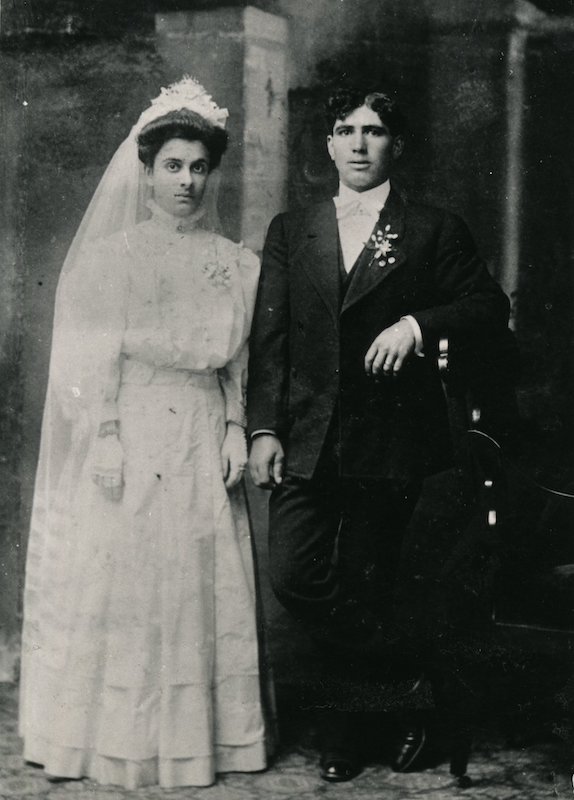 Joe was born at Santa Cruz, Island of Flores, Azores, in 1883. In 1904, he immigrated to Mendocino, where his brother Antone had settled, and went to work in the woods. Joe met Mamie at the home of a friend on his first day in town. He loved to dance and play the violin and was very happy to find other young people who spoke Portuguese in Mendocino.

Joe was granted his U.S. citizenship papers in 1917, and the following year, Joe and Mamie welcomed their only son, Bill. Later, Joe and Manuel Vieira visited their old family homes in the Azores for 6 months, returning in March 1923.

In 1927, Mamie’s mother deeded the home at 45131 Little Lake Street (just east of today’s Mendocino Community Library) to Mamie. Joe and Mamie lived the rest of their lives there, except for a few years in the early 1930’s when they lived in the San Joaquin Valley.

Joe was employed in the lumber industry in Caspar, Navarro, and Mendocino for many years, retiring from the Caspar Lumber Company in 1945. He was also a member of the Pentecost committee and a “caller” for the Chamarita dances during their annual celebration.

In a Beacon article published just a few weeks before his death, Joe described the Pentecost celebrations which were held at Crown Hall. “We had a celebration every year here. The celebration, the hall is right here on Ukiah Street. We don’t charge nothing. We buy the meat. Everybody donates in town and if you go out of town, they give you money, they give you a cow or steer or give you money or something. And then you get together and they got a hall there. They got the kitchen, they got pots to cook the meat and everything. Everybody go to church, then when they come back they eat. Then they dance on Saturday and had a beautiful time.”

Mamie died in 1973 at Howard Memorial Hospital in Willits following an illness. Joe died in Camarillo in 1977 at the age of 94, while visiting relatives in the Ventura area. Mamie and Joe are buried in Hillcrest Cemetery.

UP LIGHTHOUSE ROAD by Betsy Wolff Frey. Ginny lives in Pine Grove, California, just north of Mendocino. Between her birth in 1900 and her 13th birthday, much has happened at Pine Grove, including the building of the Point Cabrillo Lighthouse just down the hill. This book featuring a teenage main character is perfect for anyone interested in the history of the Mendocino coast in the early 20th century. $9.