January 8, 1973 – The results of a guessing contest were announced at the Mendocino Hotel. The contents of a jar of coffee beans that had been on display for two weeks were laboriously counted out by three judges. The total number of beans in the jar was 11,829, which included two beans which were thrown at “sitters-bye,” who offered “helpful suggestions” to the beancounters.

The Beacon announced the contest in December. “In the lobby of the Mendocino Hotel is an odd shaped jar which looks like an escapee from some far away chemistry laboratory in Transylvania or Guatemala. What it is doing there in that 100 year old landmark is bringing back a touch of the good old days to good old Mendocino. Inside that jar is an unknown quantity of Colombian coffee beans, roasted just the other day in a new coffee roasting establishment called Thanksgiving Coffee Company. To publicize the opening of this unique shop the owners have filled this jar to the brim with beans, sealed it with wax, and are asking all to enter this contest following the great American tradition of guessing about everything.” 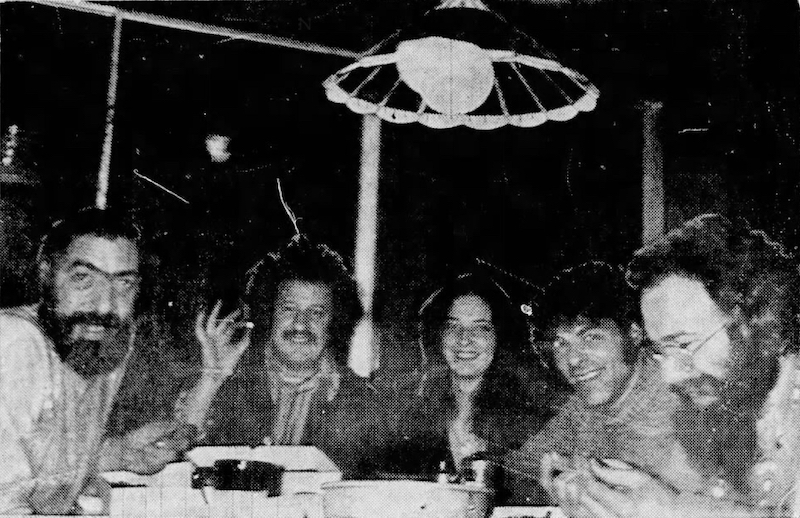 “The three judges, Vic Biondo (local bon vivant), Alphonse Riede (of Alphonse’s) and Mervin Gilbert (of the Mendocino Beacon) managed the job of counting between, over, and through a dinner served by Hotel manager Neil Hebron. Alphonse, a veteran bead-counter, officially led the tally with 7,529 beans (a personal record).”

According to Paul Katzeff, owner of the Thanksgiving Coffee Company, 420 guesses were received, with the most distant entry coming from Cincinnati, Ohio. “Guesses ranged from 202 beans to “1.2 x 10 to the 6th power” (whatever that is).”

First Prize went to Max Forseter of Philo with his guess of 11,777. He won 30 drinks from the Thanksgiving Coffee Company’s Menu – all at once, or over the months to come. Mary Kittredge of Mendocino with a guess of 11,727 won one pound each of fresh-roasted Columbian, Java, Mexican, Costa Rican, and French Roast coffees for her second place showing. “An exciting tie for 3rd Prize set nearby tables buzzing. 12-year-old Naomi Ginsberg of Albion and A. H. Assocs. of Green St., San Francisco, both guessed 12,050, and both will get a 4-cup drip coffee maker and a pound of coffee.”

Life in Northwest Nowhere, by Mervinius (Mervin Gilbert) – A collection of cartoon strips that appeared in publications in Mendocino, Fort Bragg, and San Francisco, capturing the spirit of the back-to-the-land movement on the Mendocino coast in the late 1960s and early 1970s. $15.