Bad Nights for the Steamer Crescent City by Louis Hough

Bad Nights for the Steamer Crescent City by Louis Hough

The dark and stormy nights we’ve been having here lately inspired us to reprint this column that ran in the Mendocino Beacon on July 31, 2008.

“We left San Francisco late in the afternoon of January 9th [1903] bound for Crescent City. When off Point Reyes the wind was coming from the south with a velocity of sixty miles an hour. The sea ran high and we fairly flew along. Towards midnight it came on to rain and the southerly wind increased in volume. The [First] Mate held the course which we take when running up the coast. The intense blackness of the night and the speed with which we were traveling perhaps deceived the mate and [he] misjudged his position.”

Outside it was black as ink and the wind was howling. The powerful seas lifted up the steamship Crescent City, then she plunged down with a roar. The twenty-one year old ship, a stout veteran of the northern California seas, had never had a serious mishap. But at two o’clock that night, when First Mate A. Olson saw the rock loom up from the gloom, he rang “Stop Engine!” to the engine room.

It was a slight jar, not much damage to the bow, barely enough to wake the 17 or 18 passengers. But enough to rouse the skipper, Captain H.F. Payne, who clambered to the bridge to take charge. “He was cool and collected and by his actions averted possible panic among the passengers,” said Second Mate Charles Hosmer when he continued his story. 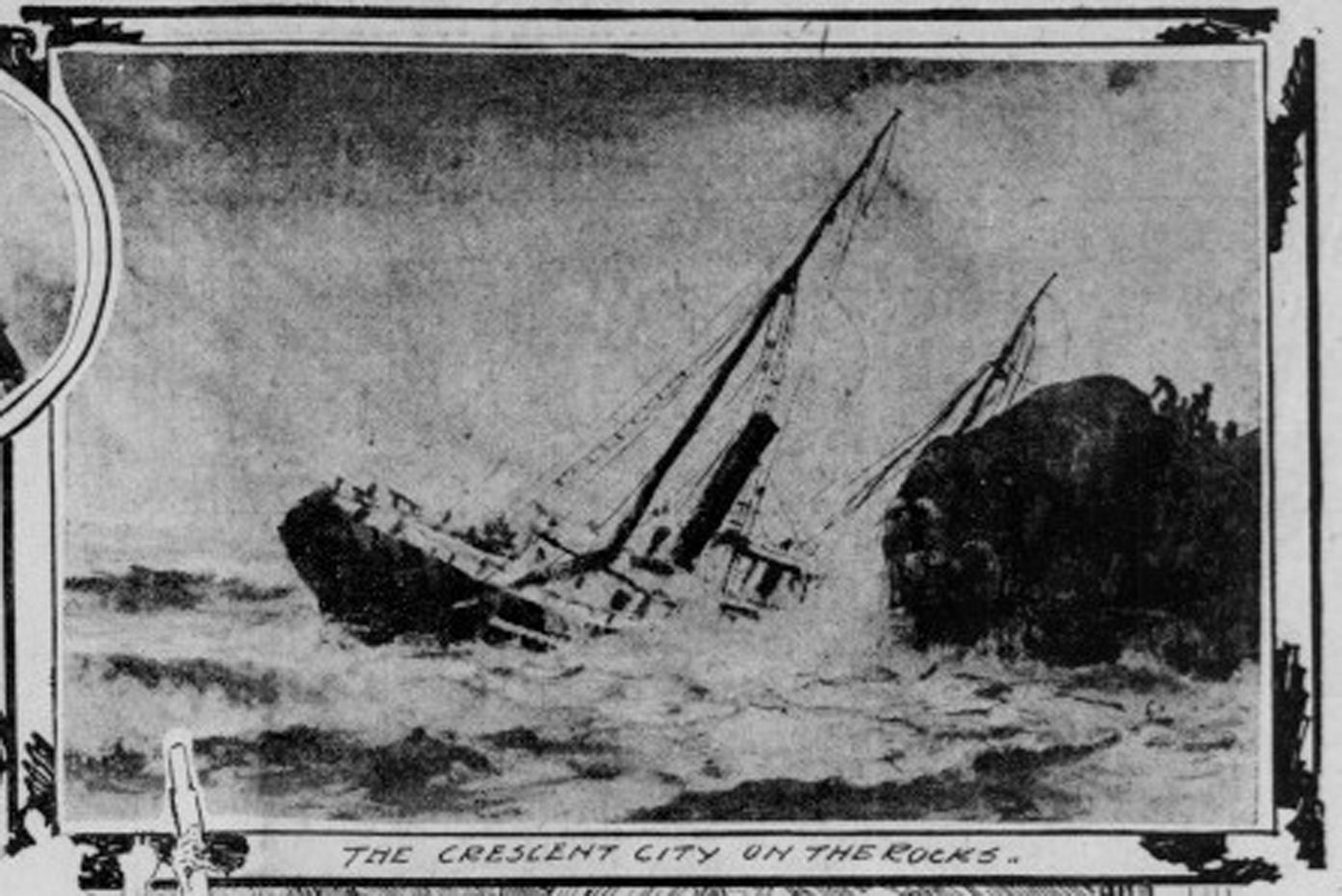 A deceptive cross current had pushed Crescent City far closer to shore than First Mate Olson could possibly have reckoned or been warned by an accurate compass. They plunged into a 100-yard wide stretch of treacherous water between Fish Rock and the shore [just north of Anchor Bay]. The vessel struck one of many low-lying rocks that stud this graveyard of misguided seafarers.

The steamer “… went broadside—against Fish Rock, striking her port side. There was the rending and crashing of timbers and water poured into the engine room, extinguishing the lights…leaving all on deck in total darkness.”

Some flares were rustled up for illumination and Captain Payne ordered the gangway placed against Fish Rock. After several frustrating attempts, the gangway was secured in a rock cleft. Crewmen assisted frightened passengers onto the rock and to a level spot. Fish Rock is about 300 yards long and 100 yards wide, but it is bare and “inhospitable.” Using canvas and timber from their stricken ship, the crew erected a shelter to protect the shivering women and children, including a four-week old infant, from the wind and rain. Crewmen brought blankets. A fire of coal oil-soaked driftwood was lit.

The rest of the miserable night passed slowly. Dawn brought only dismay when the people on the rock saw “the boiling surf” that separated them from shore. The heavy seas were still running and the Crescent City was at risk of capsizing. First Mate Olson and two passengers were able to get to shore in a lifeboat and spread the alarm.

The steamer Scotia was dispatched from Bowen’s Landing [aka Bourn’s Landing, 2.5 miles north of Gualala] and came as close as safety permitted. Her boat could make just one trip through the churning maelstrom and got only a handful of the shipwrecked souls. The rest had to remain on the rock another night. The tugboat Sea Rover from San Francisco plucked the rest of them from Fish Rock the following morning. No lives were lost.

Negligence was the cause of the wreck, said the United States inspectors. The ship’s compass had not been calibrated [corrected] for more than a year, though Captain Payne had requested that it be. The owners refused, but may have regretted their penny pinching. The sea had battered the Crescent City so badly that only the engine and machinery could be extracted from the broken hull. Her owners, Hobbs, Wall & Company, sold her for $766 to a scrapping firm. The price was considered low because the ship was valued at $45,000 and insured for $25,000.

The owners weren’t the only ones who paid. Captain Payne had his license suspended for one month because the inspectors cited his well-known habit of steaming too close to shore. First Mate Olson had his license revoked because his record showed that he had once been found asleep on the bridge. If he ever made it back to a ship’s bridge, it’s unlikely he dozed off again.

The Kelley House museum is open from 11 AM to 3 PM Thursday through Sunday. Walking tours of the historic district depart from the museum regularly. If you have a question about Mendocino history, contact the curator at curator@kelleyhousemuseum.org