January 14, 1907 – The steam schooner Sequoia wrecked on the rocks near the north jetty of Humboldt Bay. With a length of 151 feet, this vessel had a capacity of 300 tons and was built near the sawmill at Fort Bragg in 1898 specifically for the lumber trade. 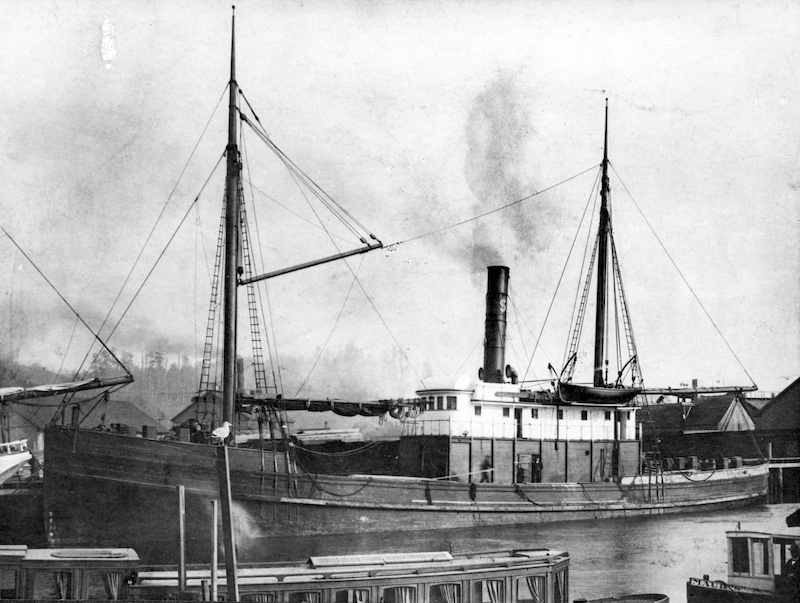 The Sequoia had sailed from San Francisco just the day before, arriving at 6 pm. The San Francisco Call reported, “A heavy pall of darkness hung over the bar, but it did not deter Captain [John] Lunstedt from making an attempt to get inside. He swung the vessel hard to port in the effort to pass one of the spars marking the channel, and it was then, says the skipper, that the tiller rope broke, and though he tried a relief gear he could not keep the vessel from going on the rocks. In a few minutes she was piled on the rocks almost high and dry.”

The Humboldt Bar Life-saving Station rescued the 25 men on board the following morning. Within days, the vessel broke in half, and the bow washed ashore, where a crew of wreckers salvaged its lines and spars. The engines couldn’t be saved, as sand had completely filled the engine room.

U. S. Inspectors Bolles and Bulger investigated the mishap in early February. They concluded “that Captain Lunstedt was negligent and unskillful in attempting to cross Humboldt Bay bar at night so soon after low water with a strong tide running.” They also found “that Knut Knutsen, chief mate, was negligent and inattentive to his duties.” Both of their licenses were suspended for 3 months.

Mate Knutsen appealed, claiming the captain falsely testified that the wheel rope broke before the incident and Knutsen failed to repair it, shifting blame to the chief mate. After examining the evidence, Supervising Inspector John Bermingham reversed the decision and reinstated Knutsen’s license.