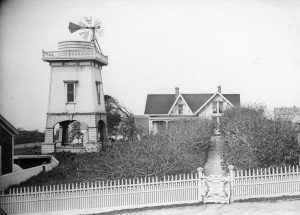 (Note: Long time Kelley House supporter and patron, Martha wrote this article in 2006 for a newsletter. We re-print it here in conjunction with our current museum exhibit, “When Farm to Table was Everyday.”)

Apples have been growing throughout Mendocino County since the 1800’s, both commercially and as family sustenance. About 1847 good-named varieties became

available. Mendocino as well as its closest neighboring areas of Caspar, East Mendocino and Littleriver (spelling used at that time) all have their apple histories. However, it may surprise many to learn that apples have long been associated with the Kelley House.

Soon after Eliza and William Kelley built their home in 1861, a walk was placed between Lansing Street and their then front door on the east porch. An ornate gate opened into this walk that was lined on each side with apples. This walk is still referred to by old-timers as “the apple walk.” Between Lansing and the house there would have been room for at least 12 trees.

But now to the “core” of this article: apples. An 1871 photo shows the Kelley’s apple walk gaining maturity and looking overly bushy. In 1902 these rows of trees were removed; a few other apples grew as singles, scattered about in the Kelley’s large yard. (One archival photograph shows a very elderly apple tree remaining in the west side of the shed near the north pond when the Kelley residence was deeded to what became the Kelley House Museum.)

In the fall of 1911, the Mendocino Farmer’s and Apple Grower’s Association sponsored their first annual Apple Fair. This first fair was held on the corner of Kasten and Ukiah Streets. In subsequent years the Fair was held in a distinctive two-story building called

the Apple Hall. This was on the corner of Kasten and Little Lake. The Apple Fair included competitive apple-judgings, a parade and many well-attended dances. At the 1912 Fair, Mrs. Kelley, using some of her special trees that had not been included in the

old apple walk, exhibited apples from some of the first trees grown in Mendocino. Apple varieties popular for competition during these early days of the Apple Fair were Baldwin, Spitzenberg, Northern Spy, Bellflower, Gravenstein, King of Tompkins, Wealthy, Jonathan, Alexander, Rhode Island, Greening and Arkansas Black. The Wealthy was said to be the coast’s favorite apple.

Unfortunately, the Apple Hall had a relatively short life. The hall was eventually put to other uses. The Hall hung on until the 1940’s, when it was sold by Augie Heeser to someone from out of the area, and was torn down for its lumber.

In the Kelley’s time, apples were considered important staples.  They creatively make mind-boggling creations on top of the stove, such as sauces and apple butter, and then there was baking, canning, vinegars and cider.  Apple driers were area-available.  Records tell us, however, that the Kelley’s built a play-house-sized apple storage directly across Albion Street from their then back door. (Many older apple varieties had amazingly long, built-in storage life.)

History is always full of questions.  When and why was a large rectangular window placed on the south side of a structure built for apple storage?  Times change many things.   Probably the original plain-Jane building was gussied-up and put to other uses.  This window did afford a perfect showcase for voluptuous trim; and Erick Jensen Albertson of Masonic Temple and Father Time and the Maiden fame was just the master craftsman for this commission.