December 2, 1932 – Ralph C. Sutherland took over ownership of the S. & E. Garage on the east end of Main Street, buying out his partner (and brother-in-law) Charles Escola. Ralph, who had been the head mechanic for nine years, renamed the business, “Sutherland’s Garage.” In addition to repairs, he sold tires, batteries, oil, and radios.

In 1934, he began selling new Plymouth and DeSoto cars, in addition to offering used car sales. In April 1936, the Beacon reported that “Sutherland’s Garage is constructing a new gas and service station just east of the garage and will have a most up-to-date place of business when it is completed. Included in the new stand will be an automatic hoist and turn table for greasing cars. Joe Kinlock of San Francisco is doing the work on the new place.”

Ralph continued to expand his business, adding a International Harvester Truck dealership in May. In August, the Beacon reported that he had sold pickups to L. C. Anderson, Frank Vierra, Frank Mendosa, and E. C. Oppenlander, and a 1-1/2 ton truck to G. L. Canclini. 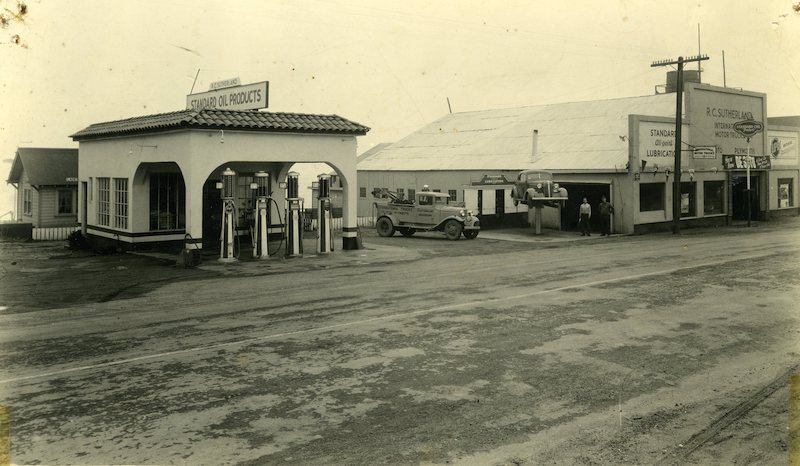 Ralph also offered the latest in modern service station technology. In 1937, the  Beacon reported that “Sutherland’s Garage recently installed a new Bear Brand Moto-Lab, which is just about the last word in precision machinery used to test motors and an automobile in general. This machinery is used to detect defects in motor operation, batteries, lights, magnetos, distributors, etc. and will handle any make of car. Car owners who have recently had their cars tested are loud in their praise of this machine.” In 1939, “Sutherland’s Garage has just completed the installation of a Tokheim computing gas pump. It is a late model and the only one of its kind on the coast thus far.”

By 1946, Ralph’s business had outgrown his location. He opened a new dealership for his Plymouth, DeSoto, and International Harvester vehicles on the corner of Main and Laurel streets in Fort Bragg. At his new location, he also offered Deering farm implements, Packard automobiles, and General Electric appliances. The following year, he sold the Sutherland Garage in Mendocino to Alf Lyons.