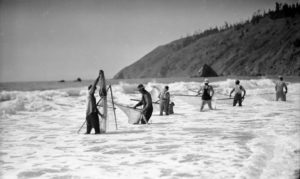 Everett Racine took this photograph which documents surf fishing. After doing a little research, it appears that these fishermen are after Surf smelt. These fish represent a critical link in the food chain and have many predators, including seabirds, sea bass and humans. Long ago, Native Americans observed that these fish, spawning in the shallow waters and moving with the tides, could be caught in nets. The A-frame shaped nets visible in the photograph were modeled after those they developed.

There are three species of smelt in the Guide to Central California Beach Fishing, published by the California Department of Fish and Wildlife: Jacksmelt (Atherinopsis californiensis), Surf smelt (Hypomesus pretiosus) and Night smelt (Spirinchus starksi). The Guide recommends fishing for Surf or Night smelt “in the daytime and evening, respectively, on a falling high tide. Both species usually spawn on coarse-grained sandy beaches when the surf is mild.” Peak months for Jack smelt are April to August and for Night or Surf Smelt from February to August.

There are useful websites addressing this topic: the California Department of Fish and Wildlife, StripersOnline.com and Seaforager.com. The most informative, because it included firsthand information, came from a post made in 2011 by a member of StripersOnline.com. The person who posted was a “senior member” at the time and used the name “Surfsmelt408” (to read the full post visit stripersonline.com/surftalk/topic/436609-surf-smelt-behavior).

Surfsmelt408 (who had been catching smelt for over 35 years) mentioned that Bodega Bay and Fort Bragg area beaches met the criteria for coarse-grained sand. The post began with the recollection that the 1960s and ‘70s saw huge numbers of smelt on the beaches. Their numbers were so great that their bodies would darken the surf zone. Birds were a good indicator of when and where the schools of fish were coming in with the high tide, and that their activity was predictable. The 2011 post also mentioned that the smelt in those decades were not particularly skittish about being approached by humans. A change in this behavior was noted as the years progressed.

Whether due to overfishing, a change in water temperatures or a change in the type and distribution of sand on the beaches, the decades of the 1980s and ‘90s witnessed changes in the schools of smelt. The predictability of their arrival in the surf seemed to have vanished, along with the great numbers of fish. The fish had also apparently gained some wisdom about practicing the avoidance of fishermen with nets, as well. As fellow organisms on the planet, we know about safety in numbers – – as their numbers fell the fish may have instinctively become more cautious. People speculated that seasons of El Niño events caused the changes in beach sand. As a fish species that is relatively low in the food chain and supports larger predators, the smelt might be seen as an indicator of environmental pressures, similar to the proverbial canary in a coal mine.

For whatever reasons, conditions seemed to improve somewhat in more recent decades. As noted by Surfsmelt408:  “Around 2003-2004 . . . the surf smelt returned in greater numbers at the local beaches. However their patterns were way different from the patterns of the decades before. Instead of the usual high tide, they would show up many times during the low tide. We would see a lot of male fish, and very few females. The schools we came across weren’t giant schools, they were big but the fish were spread out and they were spooked very easily. There were times where we had to work for the fish.”

Working for the fish was probably not the case at the time this photograph was taken during the 1930s, when Fort Bragg resident Everett Racine did much of his photography. The location for the photograph’s subject is uncertain. Everett Racine purchased his father Napoleon Job “Paul” Racine’s store where, according to articles written by daughter Dot Johnson (The Mendonesian 1996 and Real Estate Magazine 2002), fishing licenses and tackle could be purchased in the early years.

If you have photographs and memories of fishing on the Mendocino Coast, whether in the surf, from a pier or on a boat, please contact the Kelley House Museum at 707-937-5791 or curator@kelleyhousemuseum.org.