A Green Thumb and a Red-Hot Trigger Finger

A Green Thumb and a Red-Hot Trigger Finger 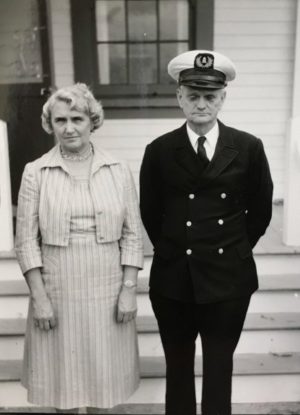 I celebrated National Lighthouse Day on Tuesday by reading through the memoirs of Cora Isabel Owens, the wife of William Owens, the last civilian light keeper at the Point Cabrillo Light Station who served from 1952 to 1963. After her husband died in 1984, Cora and her daughters wrote down their recollections of life at four California lighthouses, and a copy of their manuscript is in the Kelley House archives. By the time the Owenses arrived at Point Cabrillo in January of 1952, five of their six daughters had married and left home, so Cora’s memories of Point Cabrillo are less about the difficulties of raising children in remote places and more about the challenges of raising vegetables.

To feed her large family on a light keeper’s modest pay, and to do so miles from the nearest market, Cora had planted gardens at every one of her husband’s previous postings: Point Conception, Point Sur, and Point Arena. Since the Coast Guard commanded Point Cabrillo during World War II, the grounds had not enjoyed a civilian’s touch for a number of years so there was no garden, though there were still some rambling roses along the fences. Cora remedied that the first spring by having her husband plow up a large part of the back yard behind the head keeper’s house. She planted potatoes, peas, carrots, cabbage, corn, Brussels sprouts, and tomatoes. Not surprisingly, she quickly began doing battle with earwigs, snails and, of course, gophers.

“We bought a pair of ducks to keep the earwigs and snails down. When Bill rototilled the yard they followed behind gobbling up every bug and grub that showed.” However, the ducks could handle only what was above ground: “The soil was good and everything was growing great, but trouble then reared its ugly little head. There were dozens of gophers and they loved my vegetables. I could stand quietly in the garden and hear them biting into the carrots and potatoes. Each time they took a bite, the plant would wiggle a little and sink a bit.”

Cora’s youngest daughter, Diana, also mentions that sinking feeling in her account: “Mom had a huge garden in the back yard and I had to help out in it. The gophers were our biggest problem. One day you’d have a nice row of carrots and the next day you’d have holes where there used to be carrots.”

Fortunately, Cora had dealt with rapacious gophers at Point Arena — where she reckoned there were even more of the buck-toothed fiends than at Point Cabrillo — so she was not without defensive tactics. She had a black cat who distinguished himself as a gopher hunter, and a dog, Pug, a less devoted hunter, but happy to eat the gophers the cat killed.

In the garden she used traps because “Gophers didn’t come above ground in the garden, they didn’t need to — they had plenty of vegetables to eat below. But in the fields and lawns they would build up a mound and then come out of their hole to eat grass nearby. I discovered my most effective weapon there was Bill’s 22 rifle. I would sit and watch until the gopher emerged and then shoot it. I became a pretty good marksman.” Diana reaffirms her mother’s self-assessment: “Mom got real good with that 22 rifle.”

At Point Cabrillo, Cora found the perfect sniper’s nest in her house: “I would open the living room or dining room window just enough to get the rifle barrel through a little and then shoot the gophers at just the right moment.”

With all the bullets whizzing about, didn’t anyone complain? Only at first: “The two Coast Guard boys who lived in the house next door asked Bill what was going on, and when he said I was just shooting gophers, they were very relieved.”

If raised beds had been as popular in the ‘50s as they are today, Cora could have harvested more carrots and potatoes. On the other hand, think of all the fun she had!

If you want to have some fun reading through “Memoirs of Light Station Living,” or any of the other treasure in the archives, come by the Kelley House Museum Research Office weekdays from 1:00 to 4:00 p.m., or call 937-5791 to make an appointment.

Photo caption: Cora Isabel Owens, the Sharpshooter of Point Cabrillo, poses with her husband, Bill, in front of the head keeper’s house during his retirement ceremony in February, 1963.