Home » Making History Blog » How Tall to Be “Paul?”
Previous Next 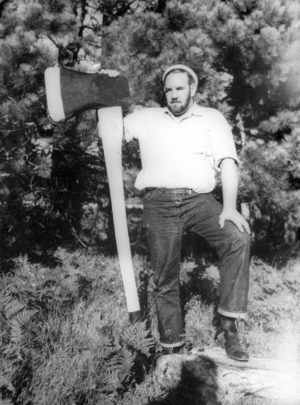 If you spend any time in our redwood forests, particularly the few remaining groves of old growth trees, you may find yourself with face upturned in an attempt to ascertain the height of these beloved giants. Ninety-nine years ago today, there was an item in an unspecified local newspaper concerning the heights attainable by humans. Mentioned in the story was Charles Alfred Buck, youngest child of Charles M. Buck and Anna R. Anderson, who was born in Little River on August 10, 1904. In August 1919, the paper noted that at the age of fifteen years, Charles, Jr., who went by Charlie, had grown to be six feet four inches tall.

This was quite remarkable for the time and considering that life had dealt Charlie some difficult blows at a tender age. His mother died of cancer when he was only five years old. He had two older sisters, Dora and Edna, who undoubtedly helped, although they were only thirteen and nine at the time. Their father was employed as the foreman at the logging camp belonging to his wife’s brother-in-law, Al Johnston. The family had raised their young children together in Little River where Anna was born and then moved to a piece of land they purchased in Comptche. Tragically, just seven months after Charlie’s mother’s death, the new family home and all its contents were destroyed by fire. As reported, no one was home at the time, so the fire burned on without being fought. At least no lives were lost.

A decade after these losses during a trip into town with his uncle Al, Charlie’s height was remarked upon. The article, titled “Some Boy This! Six Feet Four at 15 Years,” stated “he resembles the native redwood trees . . . in that you have to look a second time” in order to see his smiling face looking down on you. On that occasion, store owner John Silva became sufficiently curious to ask Charlie to stand against a wall and with step ladder and yardstick he took the measurement of Charlie’s height.

Charlie grew to manhood, following his father into the woods and the logging industry. In 1936 at the age of 32 years, his name appeared again in the local newspaper, this time with the story of how he “nearly severed the index finger of his left hand . . . while working down an ax handle.” The hand must have been treated successfully at the Redwood Coast Hospital, for two years later Charlie’s “many friends” were “highly pleased over the showing he made” on a Sunday afternoon in May. The “showing” amounted to his status as the champion of the log-bucking contest held as part of a festival in Scotia, in nearby Humboldt County. Charlie Buck was up against ten other “husky opponents.” On New Year’s Eve of that year, 1938, Charlie and Lucy Angle, a Missouri native, were married. Lucy had been employed as a cook at Camp 20 and this may have been how the couple met.

When the first Paul Bunyan Days were held in Fort Bragg, who better to represent the mythological character of the lumber industry than Charles A. Buck? With his height and able skills, he must have been an obvious choice. A small, handwritten item in the Buck family folder from the Kelley House archives noted the size of Charlie’s Levis: 46” x 36”. The first “Paul Bunyan Days” celebration in Fort Bragg was held in 1939, according to an Advocate-News article published June 29, 1989. The celebration was held on Labor Day for its first three iterations and then halted during World War II. For a while after the war, the festivities were held over the Fourth of July, but later returned to the early September holiday weekend. A photograph taken in 1939 and published with a caption 49 years later provided the information that at that time Charlie Buck stood six feet eight inches tall and weighed 298 pounds. Charlie Buck continued in the role of Paul Bunyan for many years. He was followed by Chet Shandel, Norm Shandel and currently by Mike Stephens. Charlie died in 1981, in Crescent City.

Visit the Kelley House Museum archives in Mendocino and discover stories from the recent and distant past. You can also view items online at kelleyhousemuseum.org — choose “Search Online Collections.”