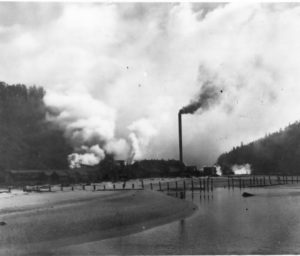 As someone who has always embraced the past, particularly that belonging to California and the other western states, it is now almost painful to look at a photograph such as this. We see the mill of the Mendocino Lumber Company, sited on the flats of Big River, going full tilt. Plumes of steam and presumably smoke as well, enter the atmosphere as countless numbers of trees were converted into lumber and shipped away. Of course, the town would not be here had it not been for the mill. All the sweet little (and not so little) Victorian homes, buildings, and churches of which we are so fond were built from these forests. One can hardly contemplate the cities of San Francisco, Oakland, Sacramento, Los Angeles and San Diego without knowing that their growth provided the markets for the Mendocino Lumber Company and its rivals. While we inherit the negative environmental results of resource extraction, we also inherit its benefits.

It’s of interest to know that the daughters of William H. Kelley and Eliza Lee Owen Kelley were not insensitive to the devastation brought to the old growth forests. They, like others, recognized that if the felling of trees continued and nothing were set aside, the great forests would be gone. Both Daisy Kelley MacCallum and her sister, Elise Kelley Drexler, made contributions to the Save the Redwoods League, established in 1918. The Kelley House Museum’s archives hold correspondence made between Daisy MacCallum and the League, discussing the purchase of a grove within the Montgomery Woods, beginning in 1942. Daisy and Elise gave $10,000 in 1946 (about $135,452 in today’s money) to set aside and memorialize a grove of their choosing. Visitors to the Montgomery Woods State Natural Reserve can view the plaques dedicated to both the “Kellieowen Grove” (for parents William and Eliza) and to “Alexander MacCallum” (Daisy’s husband).

While considering this photograph in the context of our current California summer, a record-breaker already in terms of fires if not heat, there came the realization that this was but a single mill. Representing our local expression of the industrial revolution as it does, its activities would have been multiplied hundreds of thousands of times over, across the developing part of the globe. Would people have come then as tourists, to admire the beauty of Mendocino’s slopes and shores? No, they came to work, which enabled them to marry and start families and live out their lives.

The landscapes seem to be capable of healing, to a degree. In a recent trip to Glen Blair, made possible through the generosity of a friend, I was struck by the fact that so much new tree and plant growth had occurred since the area had been actively logged. As part of my tour, I was directed to look where the manager’s house had been, or the location of the cookhouse and social hall, to see the trace of a road or that of the rail line. An entire community of workers along with the buildings sheltering those needs deemed reasonable for a lumber company to meet had essentially vanished. My guide and host explained that much of the material which time and energy had brought to the banks of Pudding Creek had been removed decades ago. Whatever could be of use again was salvaged, once it was obvious to all that this particular mill would not run again.

One road at Glen Blair was gated and posted with a sign belonging to the Lyme Timber Company, a branch of which is the Lyme Redwood Forest Company, LLC. According to their website, 112,000 acres of timberland were purchased in December 2015 using the Lyme Forest Fund IV. Quoting the page devoted to describing this land, “The property contains 85% of the watershed of the Ten Mile River, which has intact salmon and steelhead populations” (lymetimber.com/portfolio/lyme-redwood-timberlands ). It further states that if done with an eye toward the future, strictly enforced buffer zones between lumber operations and stream beds and allowing for fish migration and special habitats for spawning, logging can be compatible with the restoration of habitat for salmon and steelhead populations.

If the challenges of the 19th century were to “claim the wilderness,” ours will be to move forward beyond our 20th century mentalities to discover sustainable ways to support ourselves and the beloved environment.