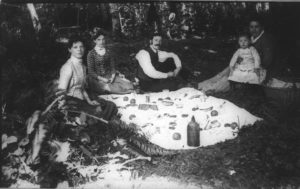 In its earliest days, social activities in Little River were not much different from the way folks have fun today. There were bars and saloons, card games and gambling for those who liked that sort of pleasure. There were parties, dances, family gatherings for holidays, birthdays and such, often with singing, sometimes with a musical instrument or two.

The 74th birthday of Isaiah Stevens, as recorded in the newspaper, was celebrated with his three daughters, their husbands and children, plus his wife and sister — sixteen people in all who enjoyed a large cake beautifully ornamented “Nov 27, 1809-1883.” The newspaper article continued, “Among other gifts, he received a token of remembrance from each of his grand-children while grandpa responded by slipping bright silver dollars into their hands. After dinner Mr. Stevens drove his company behind his high-stepping bays over a forty-acre grain field that he had just finished putting in, doing the work himself.”

Roller-skating at August Mahlman’s Pioneer Hotel, in the same big room used for dances and meetings, was a popular attraction. It’s disappointing that no one left a description of the skating events. Lacking such info, my online search didn’t reveal much either, except that the skates were probably wooden-wheeled and strapped on to shoes. My hunch is that they were very noisy and clumsy — and may be why skating didn’t become more popular and last longer.

Picnics were a popular way to get together and have a good time. Many were big events, some sponsored by organizations, or holiday celebrations. Often several families would travel inland by train from a mill. Kelley House Museum archives have more than 40 photos of picnics, the ladies in summer hats, men in suits, sitting around blankets spread with food. Unfortunately the photos don’t show the food clearly and, so far, I haven’t found a record of favorite picnic food or recipes. The photos do show, however, the everyday housewares — plates, bowls, glasses, and such, and among the blankets are probably kitchen towels used to wrap the food. A lot to clean up when back home, but so very eco-friendly.

Camping was a favorite pastime in the woods, often near a river with a nice waterhole for swimming. Hammocks for sleeping were hung from trees; wooden boxes holding food supplies were nailed up also. Sometimes, if an old mill camp cabin was nearby, it was a handy shelter from rain. Many families that moved away from the area came back to camp year after year. They took lots of photos of their outings which can be viewed in the Kelley House Museum archives.

Unique to Little River was the launching of a Thomas Petersen ship. Everyone showed up at his shipyard at the end of Petersen Lane and enjoyed a big spread of food, probably a potluck feast. These were such popular events that folks didn’t mind staying even when high tide wasn’t until after midnight.

As for personal hobbies and interests, there are few, if any, historical references to art, such as painting or sketching, except photography. Crafts, however, are documented, such as needlework, crocheting, knitting and quilting, no doubt as much a necessity as a pleasure. Making seashell picture frames was popular, as recorded in Katie Ford’s journal with instructions, and a “burnt wood handkerchief box” was a gift to Etta Pullen. Before electricity, the craft of embellishing wooden items with a heated tool was called pyrography. A gizmo fueled perhaps with kerosene was used to heat the metal tip of the tool.

Berry picking is mentioned often in old diaries as a casual social event with friends. Blackberries seem to be the most prolific, but there were wild strawberries and salmonberries, too. Like today, a bowlful of berries and cream was enjoyed before making jam or jelly or pies.

Interestingly, sometimes dessert for parties was cake and ice cream. When I first read about this in Etta Pullen’s diary of March 1896, it didn’t seem surprising because she reported that the winter weather had produced the necessary ingredient — ice — in the form of much hail during the night and snow on the next day. As I read the next few years of the diary, ice cream was mentioned again about four times, even in warmer spring months. Hmmm, how can this be, I wondered. Then, in June 1897, Etta wrote that her husband, Wilder, “went for ice this morning.” Aha! A new nugget of local history! But Etta, never one for details, did not mention where he went for the ice. Other local historians whom I recently quizzed  have never known of an icehouse either. So I have only hunches. Ice was harvested in the winter from Truckee, shipped by rail to San Francisco and stored near the wharf in a huge icehouse, most likely it was near a town that had regular wharf service, like Little River or Albion. Both places also had a large quantity of sawdust from the mills, which was the best insulation for an icehouse, and not too far for Wilder to travel by horse and buggy. It is likely that either Silas Coombs or more likely August Mahlman, being the more entrepreneurial of the two, may have built an icehouse after contracting with a ship captain to try this new cargo. The mention of ice cream doesn’t appear in Etta’s diary again after 1898, so maybe the local ice business didn’t work out. When electricity arrived in 1902, perhaps making hand-cranked old-fashioned ice cream was no longer fun. I’ll keep looking for clues. A bowl of vanilla ice cream with fresh berries might be necessary for inspiration and research stamina.

Writers, genealogists and history buffs can discover gems from the past in the archives at the Kelley House Museum. Appointments are available weekday afternoons. Please call 707-937-5791 for more information.

Photo caption: Family picnic up Big River, circa 1890 (The baby is “Olive” — can you help identify the rest?)