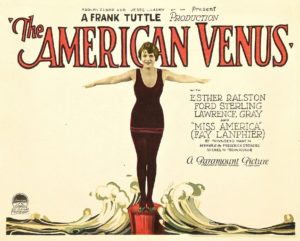 As the Miss America pageant prepares for its annual show this Sunday in the wake of the #MeToo movement, it is trying to remake itself. Among its changes, Miss America 2.0, as it calls itself, has gotten rid of the swimsuit competition! That made me think back to 1925, when the pageant didn’t pretend to be anything but a beauty contest (notwithstanding those ugly gabardine swimming suits), when a woman was a woman and a good cigar was a smoke, when Fay Lanphier, a 19 year-old “fair-skinned statuesque blonde” born on the Mendocino Coast, won the coveted title in Atlantic City and rode in Calvin Coolidge’s private railroad car to her ticker tape parade in New York City.

It’s a long way from Lansing Street to Fifth Avenue and Fay didn’t get there on her good looks alone. She had ambition and an agent! Materials in the Kelley House Museum archives confirm her Mendocino pedigree. Her maternal grandparents, Sven and Marie Olsen, lived in Caspar in the late 1880s; Sven worked in the mill and Marie ran a boarding house. Their youngest daughter, Emily, married one of the boarders, Percival C. Lanphier, about whom little is documented. The couple moved to Elk, where their first child, Fay Elinora, was born in 1905; then they relocated to Mendocino, where Fay attended grammar school and three or four more children were born. At some point, the family left for Oakland; there, in 1920, Percival Lanphier died five days before the birth of his seventh child.

Fay attended Oakland High School with the goal of becoming a stenographer and contributing to the support of her family. During her high school years, however, the attractive Lanphier saw an opportunity for fame (and some prize money) in a titillating new phenomenon in the United States: beauty contests. In 1921, the first “Atlantic City Pageant” was invented by the Chamber of Commerce there as a way to extend the tourist season past Labor Day. In 1924, hotel proprietors in Santa Cruz got into the beauty contest racket in order to kick off their tourist season; in early June the city hosted the first Miss California competition.

By then, Lanphier had managed to become Miss Alameda, and in Santa Cruz she triumphed over the other California girls. In Atlantic City that year she placed third, but she promised to return the following year. Serial attempts at coronation were permissible then, and Lanphier had begun to see that the Miss America title could launch her career in motion pictures, which she actually wanted more than a secretary’s job.

In June of 1925, true to her word, she won again in Santa Cruz and, having hired an agent, prepared to go to the East Coast for the pageant. Her agent had secured some sponsorships for her travel on a steamship through the Panama Canal and up to New Jersey. He published the schedule of her arrival in various ports, hoping to ensure that she’d arrive in Atlantic City already a celebrity. The publicity worked and Lanphier the crown won on a 12-3 vote.

Almost immediately, her agent arranged for her to be cast by Paramount Pictures in “The American Venus,” opposite Esther Ralston, Louise Brooks and Douglas Fairbanks, Jr.. The 1926 silent movie told the ostensibly gripping story of the keen competition between Miss Alabama (Lanphier) and Miss New Jersey (Ralston) for the title of Miss America, but unfortunately critics found it “a hit and miss story” that “slumps into the veriest buffoonery” and is “resolved most unsatisfactorily” by a car race. Early proof that even great actors and world-class bathing beauties can’t transcend a lousy script.

Paramount did not renew her contract, and Lanphier’s film career was over, but she was always a Miss America, even as she labored for a number of years in a Hollywood studio as a secretary.

Photo caption: Fay Lanphier poses in one of the lobby posters that promoted her sole film