November 5, 1927 – The Mendocino Women’s Improvement Club held a Parcel Post Sale at the Mendocino Hat Shop on Main Street. Proceeds from the sale were donated to the effort to install water pipes throughout the town for fire-fighting purposes.

Sending parcels thru the mail began in 1913, and Parcel Post Sales became quite popular as fundraisers. Improvement Club members wrote to their friends asking them to send small packages by Parcel Post. These parcels often contained handkerchiefs, aprons, or bonnets. Buyers purchased the unopened packages for 25 cents, not knowing what they would find inside. 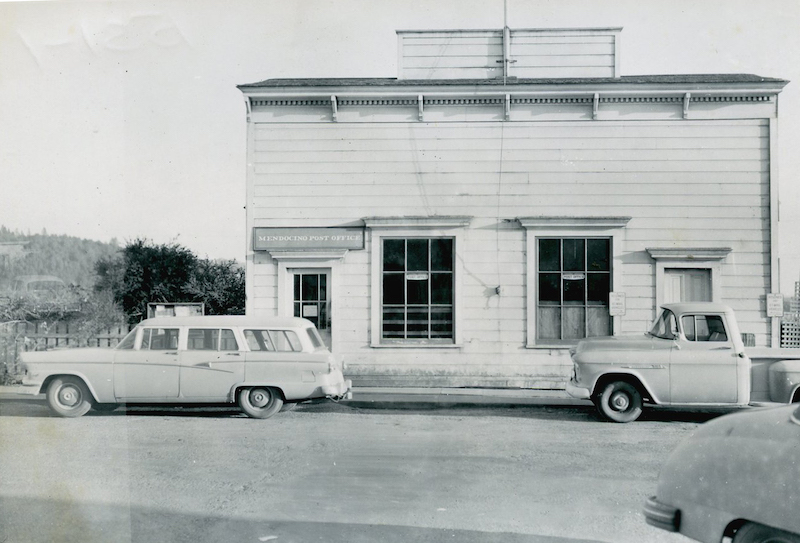 Rose Cole opened the Mendocino Hat Shop, which featured straw and trimmed hats for ladies and children, in 1924. This store was located in the eastern part of a now-demolished building on the south side of Main Street. The location was convenient for Rose, since she was also the assistant to Postmaster William Mullen, who operated the Post Office in the west end of the same building.

Rose was made acting postmaster on November 16, 1928, following Mullen’s death, and served until Asa Bishop was appointed to the Mendocino Postmaster position on March 2, 1929. By the time of Asa’s appointment, the Post Office occupied the entire building.

Now through November 27th, the Kelley House Museum invites you to explore one of life’s certainties—death—through a new exhibit on funeral customs followed throughout Mendocino’s history. Far from an exploration of the macabre, the exhibit reveals the artistry of headstone carvings and mourning parlor décor. Marvel at the business side of burial, as seen in undertaker’s ledgers and burial plot invoices. Historic photos showing the funeral practices observed amongst Mendocino’s diverse cultures, include one of a Taoist altar and another of Pomo baskets used for the deceased.