How Big Was It?

Home » Making History Blog » How Big Was It?
Previous Next

How Big Was It?

It used to be unsurprising to see someone carrying a piece of produce into the Mendocino Beacon office so the editor could inspect it and determine how big it was. If it was a record-setting fruit or vegetable, it made it into the next edition of the paper. Inspection of old Beacon issues reveals some of the important local records. Americans have long been fascinated with bigness—everything from powerful locomotives to tall buildings, and from freakily large people to 43-pound beets—and folks here in Mendocino apparently shared in that preoccupation.

In 1881, a local woman brought in a chicken egg that measured 7.5 inches by 6.25 inches. Its fame was eclipsed in 1888 when a farmer from Kibesillah sent one that was 8 inches by 6.85 inches and weighed one-quarter pound. That record stood for less than one year until a 9-inch by 8-inch egg showed up from East Mendocino. It was laid by a Minorca pullet, long known as “an excellent egg-layer.”

Apples were big around here, in every sense of the word. Ruel Stickney brought one to the Beacon in 1884 that measured 16 inches by 16 inches and weighed 29 ounces. But in 1910, four Gloria Mundi (aka American Mammoth) apples grown on the Boonville Road about 10 miles in from the coast weighed in at 5.25 pounds. Impressive, but not nearly as big as the single one reported in the American Agriculturist magazine in 1860 that tipped the scales at 3.5 pounds.

In 1880, a brave little pear tree in Pine Grove yielded 20 bushels of fruit, though we are not told what size they were. A box of peaches brought in by N.E. Hook of Comptche in 1887 impressed the editor enough for him to note that, “the smallest one in the box was 10½ inches in circumference.” That was only slightly less amazing than the 6-inch round strawberry grown nearby in 1912.

Root vegetables have also done very well in the cool weather on the Mendocino coast. In 1886 a farmer from Little River showed up with a 12-pound turnip. Imagine the forest of greens on that beauty! The 4.5-pound potato from Gualala also merited some minutes of fame in 1910 when its grower assured the editor that it was “an average potato for his patch.” Big vegetables feed big families, as they used to say.

The glory days of produce appreciation in Mendocino arrived in 1911, when a group organized the Farmers and Apple Growers Association and made plans for an annual fair to display their fruits and vegetables. The first Apple Show was held in November in the Odd Fellows Hall, but by October of the following year, a new Apple Hall had been completed at the corner of Little Lake and Kasten Streets (where the Baptist Church stands now). The annual show was held there every year until the mid-1920s, when the Apple Show combined with the county fair and moved to Boonville. The hall was used as the high school’s gymnasium until 1935, and then it fell into disrepair. In 1944, it was sold to two men from Lake County who dismantled it for lumber. 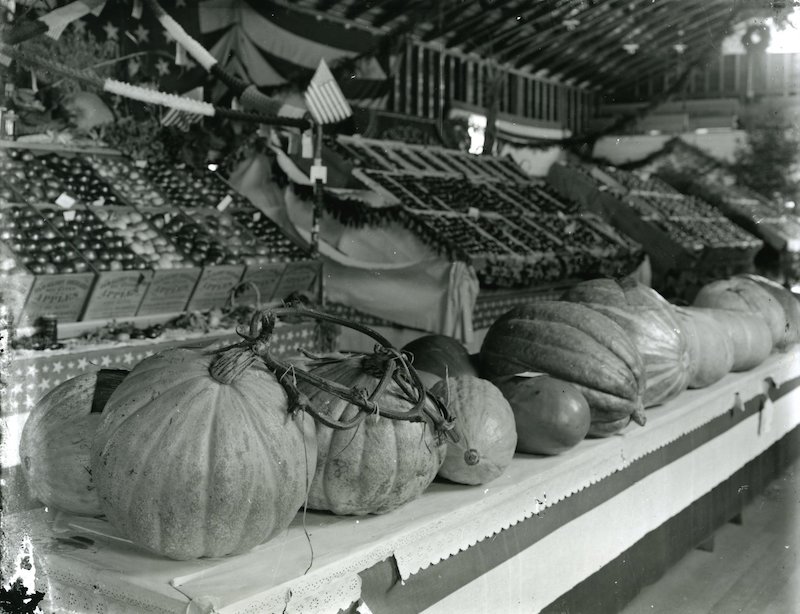 Big pumpkins on display at the 1912 Apple Fair in Mendocino

But we digress. If big potatoes didn’t rock your world, then maybe big fish did and the Beacon covered those as well. In 1894, a 45-pound cod was caught by local hotelier Joseph Neto. Getting it into the boat took quite a while, but not nearly as long as the battle in 1914 that landed the “biggest cod ever caught in Mendocino Bay.” Three men (Joe Luce, Joe Viera, and D. Valadao) were needed to fight and gaff the 53-pound fish into the boat. While cleaning it, however, they discovered “an eight-pound octopus in its stomach.” So, which cod was really the biggest one ever caught in these parts? Makes you wonder about the veracity of all these BIG tales, doesn’t it?

The Kelley House Museum is open from 11:00 AM to 3:00 PM Thursday through Sunday. Walking tours of the historic district depart from the Kelley House regularly: Tour Schedule