November 6, 1888 – A quiet wedding took place at the John Dougherty House on Ukiah Street. Miss Bessie Dougherty, only child of John and the late Elizabeth Dougherty, was united in marriage with Music Professor Charles Millard. The Beacon reported that, “The bride is one of Mendocino’s daughters, widely known and much respected. The groom, however, is somewhat of a stranger among us. Last spring he taught several classes here in vocal music, at which time he met his future life partner, and there sprang up that acquaintance and affection which culminated in the happy event.” 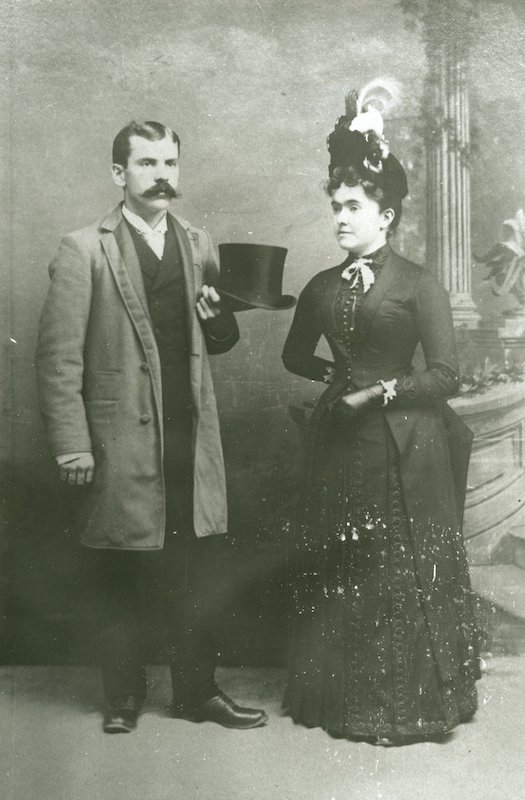 Reverend J. P. Rich of the Mendocino Presbyterian Church performed the ceremony, which was attended by a few close friends. “We extend our warmest congratulations to the young couple, and wish them a long life of happiness and prosperity.”

Charles continued to give singing lessons and organize concerts locally following the marriage. In January 1890, the Beacon reported that, “Prof. Millard was presented with a son and heir by his wife Monday. This accounted for the broad smile the Prof. bore the past week.”

Sadly, the marriage didn’t last. Just 3 months after the birth of his son, the Beacon reported that Charles was headed to Humboldt County, where he spent the summer performing. Over the next two years, he returned to Mendocino in between singing tours to Oregon and Washington, but left Mendocino permanently in June 1892. Bessie was granted a divorce on the grounds of desertion and received custody of their son, John.

Bessie inherited the Dougherty House from her father and “lived there from the first year of her life until her death.” She married Albert Gregory in 1910. Her 1916 obituary noted that she had “spent her entire life here, and the friends she made in her childhood, were still the same warm friends of her later life. No woman had a more noble or beautiful character. A loving and devoted wife, a tender and indulgent mother, a kind and generous friend, she was loved by everyone who knew her.” Bessie is buried in Evergreen Cemetery.