November 8, 1926 – The first Mendocino Boy Scout Troop held an organizational meeting. Troop Reporter Francis Nichols wrote in the Beacon, “B. S. A. Troop 39 met at their club rooms. At 7:30 the Scout master blew his whistle. This meant inspection. All the boys passed. Then we went out into the alley by the side of the club and played some games. Asa Bishop invited us over to his store and treated us all to ice cream. We marched over in troop formation. After giving Asa a cheer we went back to our club rooms.” 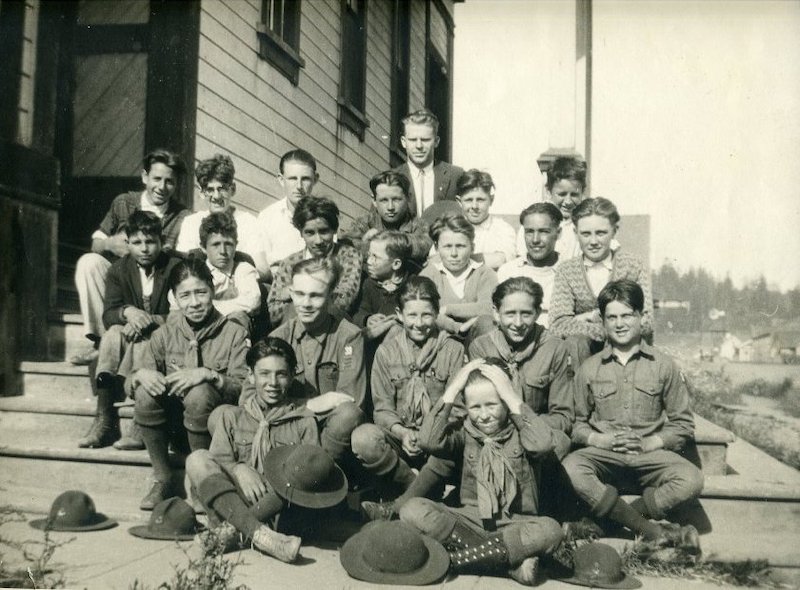 First Boy Scout Troop in Mendocino, c. 1926. Mendocino Elementary School Principal and Scout master O. Walter Walton, back row center. Henry Triplett, Francis A. Nichols, John Granskog, and Frank Valentine are also pictured but not identified. Group is sitting on the front steps of the second Odd Fellows Hall (demolished in 1955) on the northeast corner of Ukiah and Kasten Streets.

The boys were organized into patrols. Henry Triplett was chosen as leader for the Meadow Lark Patrol, Francis A. Nichols, the Owl Patrol, and John Granskog, the Eagle Patrol. The following week, Francis reported that not all of the boys passed inspection, “Two boys showed up with dirty hands and finger nails. That means two points off. […] All scouts are working hard to earn points. The winning patrol is to be given a feed at the end of three months.”

In December, a installation ceremony for the new troop was held at Apple Hall on the southeast corner of Kasten and Little Lake Streets. Eight scouts from the Fort Bragg troop and their leader, Mr. Collins, presented the new Boy Scouts with their tenderfoot badges. “The lucky ones are Henry Triplett, Clarence Hamblin, Thomas Linney, Gerald Allen, Gerald Hamblin, Hough Stauer, [Francis] Alfred Nichols, Arthur Lyons, Jerome Kundert, Leslie Amundson, Maldwyn Davies. Four boys were slow in passing their test and as their names were sent in late, their pins did not arrive. They are Kenneth Maxwell, Clarence Burbeck, Harold Hee and Johnnie Granskog. They will get their pins soon.”