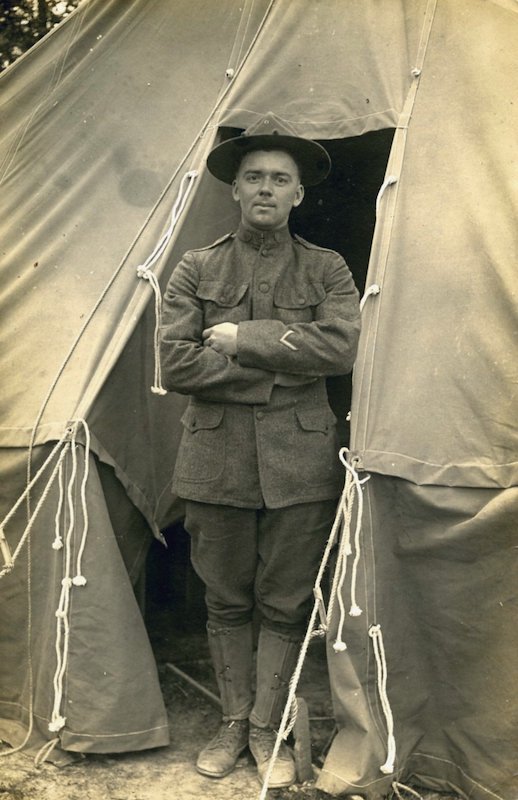 Frank Mathison in France, c. 1917. Frank Mathison of Little River enlisted in the US Army during World War I and served in the 5th Company 20th Engineers in France. After the war, Frank worked as a woodsman until he retired. On the back of the postcard is written, “From Frank Mathison, somewhere in France.”

November 11, 1918 – Town residents rejoiced over the end of World War I. The following Saturday, the Beacon reported that, “Mendocino celebrated the good news that Germany had signed the armistice beginning Monday afternoon, upon receipt of the President’s proclamation regarding the cessation of hostilities. The whistles at the mill, incline, and yard started the noise carnival, and every bell in town soon joined in.”

“James Rice and Frank Finlayson appeared with a good supply of dynamite; the former taking a station near the bluff south of the Company’s office and the latter on the high school hill, and they made the welkin [heavens] ring when they went into action. Houses shook and windows rattled and a few panes of glass broke under the force of the heavy explosions, but panes of glass did not matter on such a joyous occasion.”

“Auto owners quickly got out their machines and an impromptu band was assembled and a parade began through the principal streets, with everyone making as much noise as possible. As the celebration went on, the program was enlarged, and a big lot of beach wood was assembled at the juncture of Little Lake and Ford streets. When darkness came in the evening, a big crowd assembled.” A large bonfire was started, and the celebration lasted well past midnight.