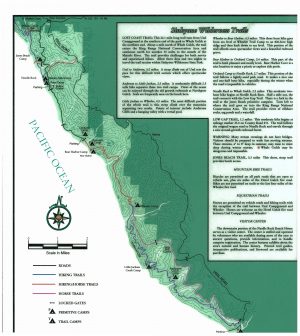 Far from prying eyes on land as beautiful and forlorn as the Scottish Highlands stood the town of Wheeler. Today, less than fifty-six years later, nothing remains of this once vibrant community but the memories shared by the thirty or so families who called it home.

Wheeler sat along the Coast at the mouth of Jackass Creek sixty miles north of Fort Bragg, isolated by the King Mountain Range. Once a Sinkyone fishing community, used to land steelhead and salmon, it was later discovered by sheep ranchers whose flocks grazed the wind-scoured bluffs above a gorge cut through old growth redwood and fir.

Much like the mythical Brigadoon which hit the American stage in 1947, the town of Wheeler was a post WWII creation. When Joe Farley returned from military duty in Europe, he seemed undaunted by the prospect of logging this last and least accessible part of his family’s timber holdings. On his first scouting mission with his friend Fred Christie, they wisely arranged for a bulldozer to accompany them as they drove into the remote area they envisioned as a future mill town.

What made Wheeler unique was its footing in both modern and traditional logging. Faced with the same challenges as the old dog holes of the Mendocino Coast, Farley and friends bought a 12’ x 36’ ex-military landing craft mechanized (LCM), but instead of delivering troops to the black sands of Wheeler Beach, they brought prefab housing and other materials—no small feat due to limited radio access and changeable seas.

Despite the remoteness of the region, the mill was said to be the most modern in the area. Pictures of the time show a model company town with its own store, one-room school, and a powerhouse. On weekends, the school doubled as a community center where movies, dances, potluck dinners and church services were shared, as were the joys and sorrows of small town life. Many described their time in Wheeler as among the happiest in their lives.

Eventually, costs made it apparent that the mill would never be profitable. From the beginning, periodic storms damaged equipment, caused landslides and even whipped up a curious chest-high foam which blew up from the ocean. Later, winds tore off roofs and destroyed buildings reclaiming the place for Mother Nature. In 1960, after only fourteen years, the land was sold and the last residents moved away.

Years later, on hearing that Wheeler would become part of the Sinkyone Wilderness, Joe Farley told writer Fred O. Smith III, “It was a wild and beautiful place of coastline and I’m glad it’s being preserved.”

The lost town of Wheeler and the Sinkyone Wilderness Area are accessible to hikers via the Lost Coast Trail. The map shown is available on the following link:  https://lostcoasttrails.wordpress.com/sinkyone-wilderness-state-park/