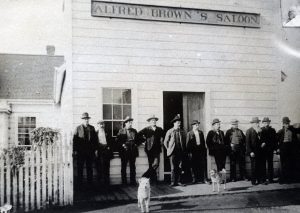 While volunteering one Sunday as a docent at the Kelley House Museum, a visitor asked, “How many saloons existed in Caspar in the old days?” I didn’t know, but replied that I’d do some research and write about it. I can now share that information.

Much of what I found was in the book that featured entries from the Mendocino Beacon that discussed Caspar. We forget in our busy world today how every form of social interaction a century ago was material for a newspaper notice. The Beacon covered the lumber mills and railroads, and a family’s births, birthday parties, weddings, anniversaries and deaths. Accidents, school and fraternal gatherings, farewell parties, all of these were of local interest and would fill up space in the newspapers.

The first reference to a saloon appeared in 1873, when it was noted that Caspar’s Hotel had a fine stock of wines and liquors of choice brands. It was also reported that John King’s Billiard Hall and Saloon had a first class assortment of wines, liquors and cigars, and the place was nicely painted.

Pine Grove Brewery, just south of Caspar, had a “good quality of lager beer that cannot be surpassed in California in five or ten gallon kegs or barrels…” and may have supplied the local drinking establishments. In 1879, John Cummings of Caspar proclaimed he had “…fitted up a saloon in first class style and constantly keeps the best brands of wine, liquor and cigars….” In 1880, Caspar was reported to have five saloons.

In 1907, the Beacon noted that the County Board of Supervisors issued permits for fifteen saloons in un-incorporated coastal communities; six were in Caspar. A.G. Lundgren, S.D. Nolan, J. Anderson, S. Jacobsen, S.D. Shinn and A. Brown were all selling booze. A. Brown had purchased John King’s Caspar Saloon in 1894. Woe be it to the citizen who contested a saloon license in their community. H.S. Tregoning, a butcher, protested issuance of a saloon permit to some Caspar proprietors and the saloon men of Caspar, Mendocino and Fort Bragg all promised to influence their friends to boycott Tregoning meats.

Caspar, along with much of the Mendocino Coast, voted to go dry so prohibition came a decade early and lasted a decade longer. In 1917, the Davidson Saloon, listed as just south of the Caspar Hotel, was selling soft drinks, candy and ice cream.