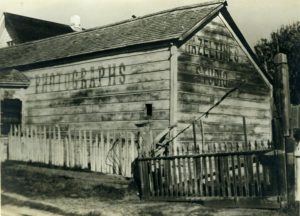 During his long and peripatetic life, Martin Mason Hazeltine lived in many places. Born in Vermont in 1827, he was raised with his seven siblings in St. Charles, Illinois. In 1850, he came west in search of gold, following in the footsteps of his younger brother George, but things didn’t pan out and the brothers returned to the East Coast and became daguerreotypists. Originally trained in St. Charles, as they advanced, they moved to New York and then to San Francisco in 1853.

For two years, they worked together until George sold his share of their partnership and Martin took a wife. Both men combined photography with other freelance interests for the remainder of their lives.

Was it the spellbinding ocean views or the soft Mendocino light that prompted him to settle here? It’s hard to say, though he would not be the first artist to fall under the Coast’s enduring spell.  With his wife and growing brood of children, his sixteen years in Mendocino were productive and happy ones.

Though he is primarily known today as a scenic photographer, an advertisement of the time states:

“M.M. Hazeltine respectfully announces to his friends & the public generally that his New Photographic Gallery on Lansing St. is now open & he is fully prepared to take all styles of pictures in a manner never before obtained on this coast & at prices which cannot fail to be satisfactory.”

During his tenure here, Hazeltine’s best-known studio was on Howard Street between Ukiah and Pine. Many of the earliest views of Mendocino County are directly attributable to him and were reproduced by J.P. Soule and Lawrence & Houseworth, firms specializing in stereoscopic cards. His skill as a view-taker earned him a place as chief scenic photographer for railroads such as both the Southern and the Union Pacific.

During this time, Hazeltine partnered with photographer J.J. Reilly and traveled to Stockton to photograph the Yosemite Valley and the big trees of Calaveras County. When, in 1883, he decided to leave Mendocino for Stockton, the Beacon wrote a fitting adieu: “His gallery has been a charming place in which to spend a leisure hour, among the beauties and sublimities of the western slope, which his skill had made accessible to us. It is the very next thing, and almost as good, to gaze with ever increasing delight at his stereoscopic views of them, as actually going to the tops of the Sierras, and the depths of Yosemite.”

When he died in 1903, M.M. Hazeltine was considered one of the foremost early California photographers; known also for his work in Oregon, Washington and Idaho. A testament to his impact can be found in the archival holdings of the Kelley House Museum, the Bancroft Library, and libraries around the country.

Look for the work of Hazeltine and other historic photographers who made the Mendocino Coast their home in our upcoming summer exhibit: “Framing History – Worth a Thousand Words,” opening May 26 at the Kelley House Museum.