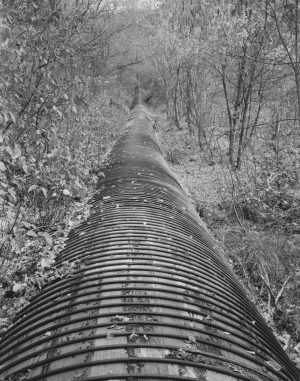 When people think of water pipes, they generally think of PVC, copper, iron, clay or concrete pipes, but one material which rarely comes to mind yet which was cheap, abundant, local, and in many respects, a manufacturer’s dream was . . . redwood.

The many old water towers prominent around Mendocino attest to redwood’s durability for freshwater storage. It was equally prized for tanning vats and septic tanks, some of which are still in use more than a hundred years later. What a lot people don’t know is that redwood lumber was also used to pipe water.

Wooden pipes have been around for hundreds of years, and both hemlock and elm were used as conduit in England in the 16th and 17th centuries. The concept was simple: a straight log was center-bored and new segments (tapered at one end) were inserted into the original section and fastened with a peg or other coupler. Wood was readily available and somewhat insulated compared to other materials and, when continuously exposed to water, did not rot. But, in redwood, the concept of the wood water pipe reached its pinnacle.

Aside from its resistance to insects, fungus, corrosion, and other problems, redwood imparts no taste to liquid. Redwood pipes cost about a quarter of what one paid for iron pipes at the time, and compared to metal—which expands and contracts with temperature changes and requires expansion joints—redwood was unaffected by temperature.

Originally, redwood pipes were bored and transported in much the same way as logs, but with the innovation of the wood-stave water pipe, redwood piping spread far and fast. Similar to the sections or staves of a wooden barrel, interlocking segments of clear heart straight-grained stock were staggered like brickwork for strength and formed into a tube. Once completed, they were bound with iron or steel bands or wound with copper wire to hold their form against internal or external pressures. Since the wood could far outlast the bands, bands were treated with an anti-corrosive like asphalt to protect them against decay.

Initially, stave pipes were packed as flat sections and proved much easier to transport and install than concrete or iron, especially to mountainous regions where steep grades added cost and hazard to any journey.

Eventually, completed sections of stave pipe were sold in standard diameters, from one inch to several feet. The U.S. Patent Office, newspapers, and trade publications of the time show an array of improvements to stave piping which prolonged the product’s life in service. Even today, there are still segments of redwood pipe in use in water systems around America.

Photograph is a view of a wood stave pipe, Ogden, Utah: The Library of Congress