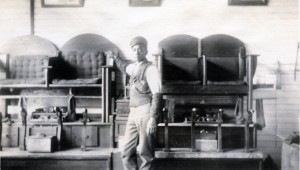 This image recently surfaced at the Kelley House Museum’s archives and carried a note which stated that it was taken in Fort Bragg. Does anyone remember this? Where would this have been? Could it have been located in the California Western Depot or in a hotel lobby? Was it on Main Street or some other well-traveled part of town? The estimated date of the photograph is “c. 1930.” There is siding behind the stand, and three frames are visible in the uppermost portion of the photograph. These frames could be windows or they could be framed paintings or some other items hung on the wall. The stand could have been located within an interior space or outside.

Our photograph brings up many questions – questions which take us to places that we may not necessarily wish to visit. Photographs, like so much of history, are subject to interpretation. What is visible here are two different shoeshine stands, placed right next to each other. Their differences are indicated by the appearance of a slightly different height to the platforms of each, as well as the differences in the upholstery of the seats. A gentleman of African-American descent stands with his eyes to the camera, his body turned slightly, in a fairly relaxed pose, with one arm resting on a portion of the arm rest of one of the stands. He is dressed for work, wearing a white shirt, vest and sleeve protectors; the vest has what appears to be a watch chain across it. A cap covers his head. Was he the owner of the stand, the shoeshine ‘boy?’ Or, was he employed somewhere nearby, in some other capacity, and just happened to be standing there when the photograph was taken?

Fifteen years ago, John W. Fountain wrote an article published on June 3, 2001 in the New York Times which addressed some of the history behind shoeshine stands. The article, titled “Sun is Setting Over the Realm of the Shoeshine King,” states

It used to be that up and down big-city or small-town streets across America,
a young man could earn a few dollars shining shoes. Even when discrimination kept
African-Americans from other lines of work, they could always get by shining shoes.
But among African-Americans, the image of a black man stooping to shine a white
man’s shoes still conjures the days when black men could only hold jobs as Pullman
porters, cooks, bellhops, yardmen and shoeshine boys.

That was the image this photograph conjured for me. For others, there may be a longing for a time when one’s appearance mattered across the business world, before casual Fridays and shoes which don’t require shoe polish and can’t be improved with that buff and shine. There was a whole culture to the shoeshine business; one which reflected the larger context of the culture out of which it came, and today, as then, Fort Bragg is part of it all.

If anyone can identify where this stand was located, or remembers it, or best of all, knows of the gentleman in the photograph, please contact the Kelley House Museum by calling 707-937-5791 or send an email to curator@kelleyhousemuseum.org. We’d be very pleased to hear from you!