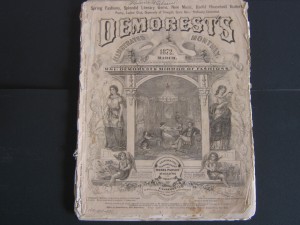 Here’s a treasure from the vault of the Kelley House Museum! There’s also a lesson in its survival for everyone who considers whether or not they can afford to be a ‘pack rat.’ Someone, possibly Minnie Olsen’s mother, Julia, made the decision to keep the March 1872 issue of ‘Demorest’s Illustrated.’ Perhaps it was the colored illustrations (as the periodical’s name implies) of the fashions for women and children, which grace the pages of this magazine; the styles of clothing shown reflecting the change of the seasons. Or, it may have been the music contained within – scores to such favorites as “Dear Bessie, My Wealth is in Thee,” “Home! Sweet Home!” and “Grand March from Suppe’s Opera, The Poet and Peasant.”

The magazine was published in New York City, and boasted that it was “Universally Acknowledged the Model Parlor Magazine of America.” We can only guess at the subscriber’s excitement on its arrival, living as they likely did in Anderson Valley. Minnie Grace Gschwend was born on March 1st, 1880, in California, to a man whose parents were both born in Switzerland. Minnie’s father, John Thomas Gschwend, Jr., was born in Illinois, and moved with his family to California.

The Gschwend Family was prominent in the Anderson Valley, and also prolific in their offspring. They settled in Mendocino County in 1855, having selected land in the northwest end of Anderson Valley, according to Blanche Brown’s book Grass Roots of Anderson Valley (1981, AVA Printing Shop, Boonville, CA, pp. 29-31). Minnie Olsen’s grandfather, John Gschwend, Sr., had been employed in a sawmill back in Illinois, and when he arrived in Mendocino County, seeing the groves of trees at hand, and the stream on his land, he set up a mill of his own.
As more settlers came here from Switzerland, a small community began, and was named “Christine”. Minnie’s grandfather, John, Sr. also served as supervisor, representing this part of the County for three years, beginning in 1862. Perhaps his principal claim to fame is that he was responsible for logging the log which was later carved by Erick Jensen Albertson into the sculpture which has become an oft-photographed and iconic symbol of the town of Mendocino: “Father Time and the Maiden.”

Minnie Grace Gschwend married Hammer Olsen, and lived in Anderson Valley as a farmer’s wife, according to the U.S. Census of 1910. Was the copy of ‘Demorest’s Illustrated’ ever thumbed through by their adopted daughter, Josephine Brusa? Minnie died in Mendocino in 1951. Whatever the trajectory, the magazine has found a home in the Kelley House Museum’s vault, where it can be relished by researchers. To set up an appointment to conduct research with us, please email curator@kelleyhousemuseum.org, or call us at 707-937-5791.