December 27, 1932 – Mrs. Mabel Crawford died at her home in San Jose at the age of 55. According to the Beacon, Mabel “had been in ill health for some time and recently suffered a stroke of paralysis.”

Mabel was the daughter of John and Euphemia (Clarke) Thompson. John was a pioneer of the Mendocino coast, arriving from Canada in the 1860s. He worked in the lumber camps as a chopper, felling trees. In 1874, he returned to Ottawa to marry Euphemia, a childhood friend. Soon after their marriage, they briefly moved to Caspar, before settling in Mendocino. Their children, Mabel and her older brother Bert, were born here.

Mabel “was a member of the first class to enter the Mendocino high school when it was established in 1893.” For the summer and fall terms, Professor R. Y. Glidden was the only teacher, and high school classes were held at the early-day schoolhouse located near the northeast corner of Lansing and Ukiah Streets. When the spring term began, classes moved into the newly constructed Mendocino High School building, which was torn down in 1948. The high school curriculum at that time was a three-year course. 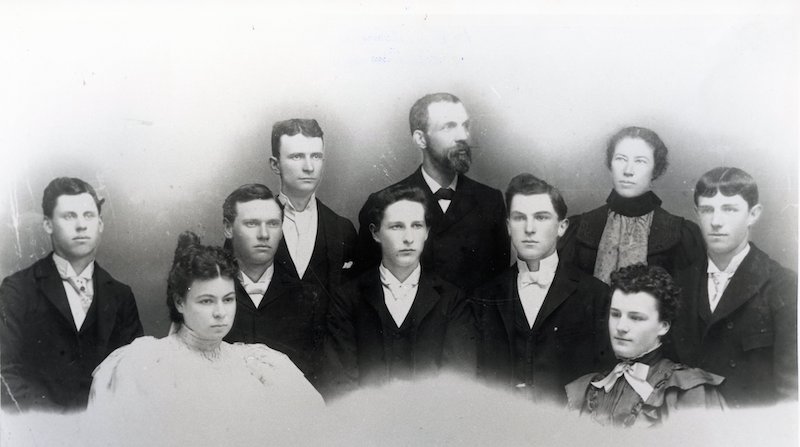 Seven students graduated from the high school in 1896, and Mabel was the class valedictorian. After attending San Jose Normal School (now San Jose State University) to obtain her teaching degree, she returned to Mendocino County. “She taught in the Fort Bragg grammar school for a number of years, and in the Mendocino grammar school and in other schools of this county. She was a State Normal graduate and a bright and talented woman. Following her marriage to Mr. George Crawford of San Jose she gave up teaching.” George and Mabel owned a confectionery store in San Jose.

Survivors included her husband George, and her brother Bert of Bridgeport. She was buried in Oak Hill Cemetery in San Jose.