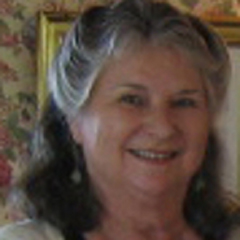 A long-time pillar of the Kelley House passed away in early December, and we wish to acknowledge her work for the museum and the community it serves. Both as a tireless volunteer and a dedicated employee, Megan Coddington Smith did much to make the Kelley House Museum the institution it is today.

Megan was born in Lawton, Oklahoma in January 1942, the youngest of four children, three of them boys. Her family moved to Concord, California when she was ten years old. After her first youthful marriage and child, she married Tom Coddington, moved to Lakeport, and had four more children. She raised them while working in the library as an administrator and in the hospital in community relations. In both positions, she developed her admirable ability to organize volunteers.

Megan married Rex Smith in 1995 and lured him into being a Kelley House docent, a position he still holds happily. Though she had moved on to other positions in the community in 1996, in 2005, when staffing changes at the museum caused a pressing need, she let herself be talked into returning as director for a couple more years. During that time, she hired Carolyn Zeitler to be our archivist, a move that has served the Kelley House immeasurably well since then. Carolyn actually retired as archivist in 2016, after ten years of painstaking work, but she continues to volunteer at the Kelley House every Friday, putting her deep knowledge of things Mendocino to work for all of us.

After Megan stepped down from her second gig as director, she volunteered as a museum docent for many years. Megan then served as a board member from 2015-2022. Unfortunately, she had to leave the board last summer due to her poor health. That means there is room for another history lover or two to take her place. Megan’s story illustrates just how much one person can do for her organization and community. The Kelley House is deeply grateful that Megan chose to give so much to us.

If you would like to volunteer at the Kelley House, or serve on the board of directors, please contact Marguerite O’Brien at curator@kelleyhousemusuem.org, or call (707) 937-5791. The Kelley House Museum is open from 11:00 AM to 3:00 PM Thursday through Sunday. Walking tours of the historic district depart from the Kelley House regularly, and extra tours have been added for the holidays.