Tenants Warren and Gladys Roll noticed smoke and heard a popping noise around 10 pm. Gladys “ran to the fire station and pressed the button, sounding the alarm. The fire department arrived very quickly and in a short time put the fire out. The firemen returned later to check the area as a safety precaution. The fire caused damage to the interior and exterior walls and windows. The total damage has not been determined.” 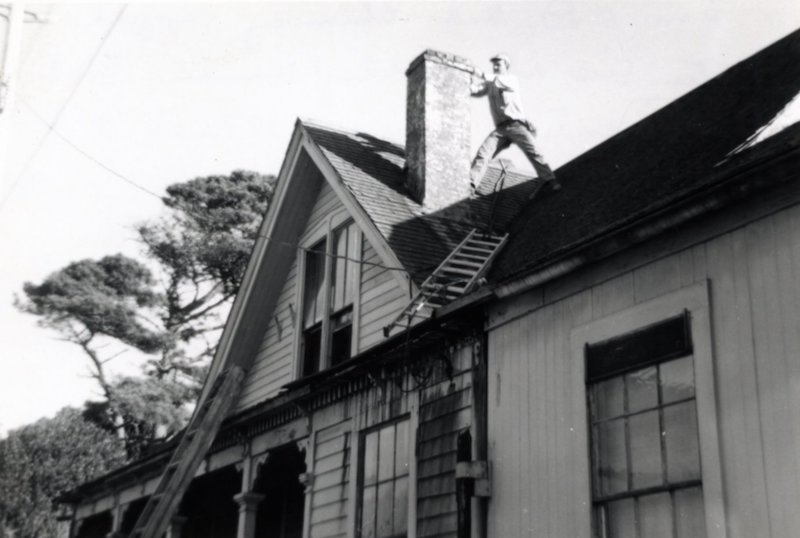 Kelley House Chimney Restoration, 1983. View of the roof and north elevation of the Kelley House from Albion Street where a mason is restoring the chimney in the dining room.

The chimney was capped by Jim O’Donnell following the fire. In April 1975, Robert Peterson, founder of the Jack in the Box fast-food chain and owner of the Mendocino Hotel, presented the deed to the Kelley House property to Mendocino Historical Research, Inc. (later, the Kelley House Museum), for its restoration and preservation efforts. The chimney was restored in 1983.

Sunday, October 30, 11AM-12:30PM – Take a hauntingly beautiful walk through Evergreen cemetery, while your “spirit guide” (Kelley House curator, Marguerite O’Brien) brings to life some of the colorful residents of this 19th Century logging town with her storytelling. Meet the town’s pre-eminent builder, who also happened to be the undertaker. Chuckle at the story of Cinderella, who lived nearby and played a very mischievous prank to discourage inebriated men from taking shortcuts through the cemetery. Admire the artistry of the headstones and learn how to translate the symbols depicted on them. The tour meets at the Kelley House Museum, where the current exhibit “Good Mourning, Mendocino” reveals different cultures’ funeral rites and customs. $20 per person. Pay in person by cash or credit card at time of tour, or book in advance online.