October 25, 1916 – The 1916 Apple Show parade was held in Mendocino. Constable A. L. Patton, “as grand marshal, headed the procession and was followed by the Native Sons of the Golden West band. Then came the long line of floats, automobiles, marching school children, horseback riders, etc. This year’s procession was far and away ahead of anything in that line that was ever attempted in previous Apple Shows and to Frank O. Knacke, chairman of the parade committee, and his able assistant, Jack Hentzell, the greatest praise is due.”

Prizes were awarded, and the most eye-catching entries were described in the Beacon. The Kelley House is very fortunate to have a photo of Burtt Elliott’s float in our collection. Elliott’s General Merchandise Store was located in the Jarvis & Nichols building on the northeast corner of Main and Kasten Streets, where Gallery Bookshop is today. Charlie Bever was the delivery truck driver for the store, and the delivery truck was decorated for the parade. 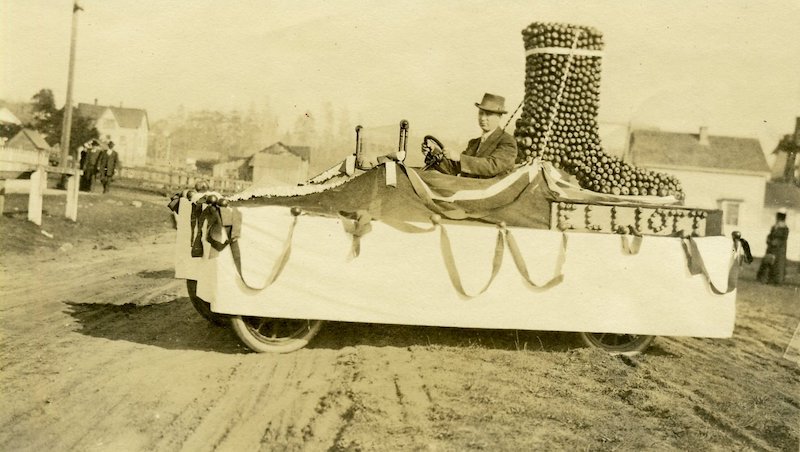 Charles Bever in Apple Show Parade Float, 1916. Photograph of a man in a float with a large boot constructed of apples; on the side of the float is the name “Elliott” similarly constructed with apples. On the reverse of the photo is the notation, “Charlie Beaver [sic] Apple Fair Mendocino 1916.”

“Elliott’s was represented by a big shoe made entirely of apples. This was one of the best feature displays in the parade. The shoe was an artistic piece of work and was the object of much admiring comment from the spectators along the line of march. It was an appropriate emblem for this progressive business house which carries probably the largest stock of shoes of any store in Mendocino County. The shoe is now on exhibition at the Apple Hall.”

Sunday, October 30, 11AM-12:30PM – Take a hauntingly beautiful walk through Evergreen cemetery, while your “spirit guide” (Kelley House curator, Marguerite O’Brien) brings to life some of the colorful residents of this 19th Century logging town with her storytelling. The tour meets at the Kelley House Museum, where the current exhibit “Good Mourning, Mendocino” reveals different cultures’ funeral rites and customs. $20 per person. Pay in person by cash or credit card at time of tour, or book in advance online.