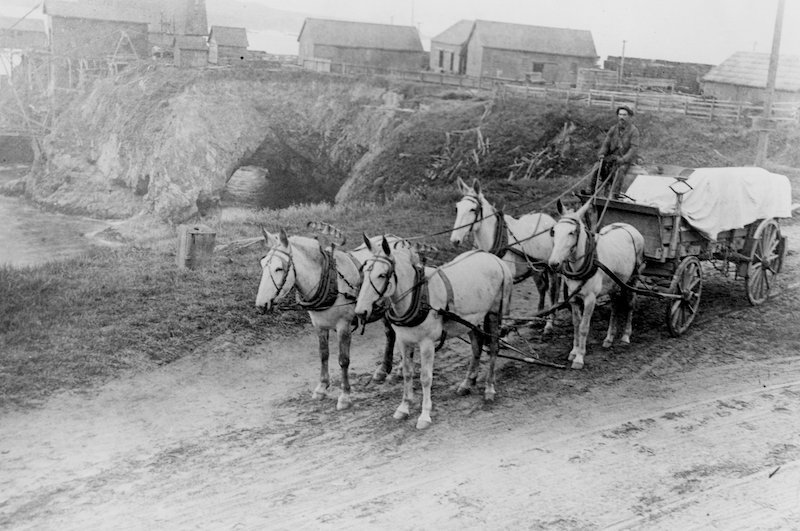 Photograph taken near the south end of Heeser Drive of a man driving a four-horse team and loaded wagon near the Mendocino Lumber Company’s Shipping Point on the bluff above the bay. The two lead animals have bells attached to their harnesses that would signal their approach to other teams traveling around road bends. The Point’s sea cave is visible under the bluff. Point Beach (aka Portuguese Beach) is below them.

The team is traveling on a dirt road, part of a curving tramway system with rails, seen at lower right. This tramway was used by the lumber company to transport goods (lumber, pickets, shingles, etc.) from the Mill on Big River Flat to the Point and its lumber storage areas.

The Shipping Point had many structures, including its own office with telephone and telegraph connections, all associated with the storage and transfer of goods to the ships that moored in Mendocino Bay. The two buildings in the middle of the image are “Warehouses,” according to the 1909 Sanborn map. Behind them is a “Hay & Grain Warehouse,” originally a barn. On the right is a “Barn,” and to its left is a round, shingled water tank located on the ground. Oxen and horses were used to pull the tramway cars until 1919, when the Company purchased a locomotive and a Holt tractor to replace animal power.

Behind that barn is a tall stack of lumber. Utility poles seen nearby brought electrical power to the Point from the power plant located down by the Mill.

On the left side of the image is a “Boat Shed,” although it was originally used as a steamship passenger depot and freight house when apron chutes were employed here. The support structure for a wire cable system is visible in front of it, which was used from 1902 onward to lower materials onto ships.

In the background, and set at an angle to the other buildings, is a large two-story, barn-like structure with a corrugated iron roof that housed a powerful hoisting engine upstairs. Inside at ground level, out of the wind and weather, was a large open space where men loaded the cable carriers with goods brought right to the building via the tramway system. Between this structure and the Boat Shed was a smaller hoisting engine house and a building for the wood-fired boiler that created the steam to power all the machinery.

Now through November 27th, the Kelley House Museum invites you to explore one of life’s certainties—death—through a new exhibit on funeral customs followed throughout Mendocino’s history. Far from an exploration of the macabre, the exhibit reveals the artistry of headstone carvings and mourning parlor décor. Marvel at the business side of burial, as seen in undertaker’s ledgers and burial plot invoices. Historic photos showing the funeral practices observed amongst Mendocino’s diverse cultures, include one of a Taoist altar and another of Pomo baskets used for the deceased.