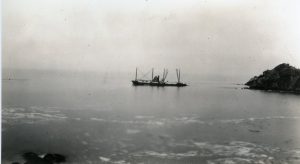 On a wet winter morning, few things are better than shelter, a hot cup of coffee, and a story, especially a local one.

In 1938, a steamer ran aground off the Mendocino Coast. Built in 1918 in Toledo, Ohio, as a military ship, she was christened the Lake Cayuga. With the end of World War I, she was repurposed as a merchant vessel and renamed the Dorothy Wintermote, after the daughter of the founder of the Puget Sound Lumber Company.

At 251 feet long, the ship weighed 1227 tons and had a carrying capacity of 1,800,000 board feet of timber. When not full of timber, her extra space was used to transport household goods, such as fruit, cocoa and coffee.

The weather was clear on September 15, 1938, but things changed overnight as a heavy fog rolled in. At 7:50 a.m., the Dorothy Wintermote radioed an SOS:  she had run aground on Fish Rock near the mouth of the Gualala River.

The impact tore two holes in the bottom of the ship and left her stranded on jagged rocks. For four days her crew was on high alert, making repairs and waiting for aid, uncertain of their fate or that of their primary cargo—20 tons of vacuum-sealed Hills Brothers Red Can coffee, packed in paper cartons.

When the Coast Guard arrived, the Dorothy Wintermote prepared to be towed off the rocks. She was not the only ship damaged in the fog; the Santa Rosalia, a fishing trawler out of Monterey, was wrecked the same day and had been towed to San Francisco uneventfully, where she waited for repairs. Everyone hoped for the same outcome as the tug, Sea Giant, secured the Dorothy Wintermote and carefully pulled her into open water.

Almost instantly, she began to list as water poured into a 15-foot tear in her hull. Before anything could be done to save her, she sank to a depth of 240 feet.

Fortunately, Captain O. J. Olson and all 29 of his crew—including their mascot, a scrawny tabby cat—were evacuated to safety. On the Coast Guard cutter, Shoshone, they praised the men who had saved their lives and posed for pictures with their cat.

Normally, this happy ending would be enough, but for the Dorothy Wintermote, there was still more good news.

Within hours, the cartons in her hull dissolved, and their vacuum-packed contents bobbed to the surface. Over the next few days, a half-mile stretch of beach was littered with hundreds of red cans of coffee coated with lard and cocoa—that is, until word got out.

When Hills Brothers representative M. L. Meeker arrived on the scene, much of the coffee was gone! Locals had rushed from miles away to salvage the two-, four-, and 15-pound cans, which they washed and cleaned on site. Reports that some people gathered 2,000, 3,000, or even 6,000 pounds of coffee were not uncommon.

The ship and its cargo valued at $115,000 were given up for lost. Both were fully insured.