Fun and Games: Mendocino at Play

Fun and Games: Mendocino at Play 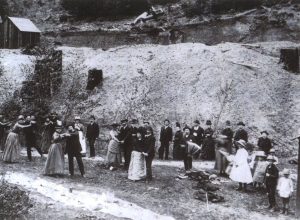 Having recently lived without electric power here on the Coast, it is not as difficult to imagine the lives of those who came before the phrase “screen time” came into use!  Our next exhibit at the Kelley House Museum will take a look at how people chose to spend their free time before the arrival of electronic gadgets.

Not everyone had much free time, but even the youngest mill workers and their families would have taken a break on Sunday.  On those days when the weather was pleasant and the opportunity to gather presented itself, people planned picnics, outings to the beach or the woods, organized activities for entire towns such as races, a boxing match or a game of baseball.  Some pursuits were meant for everyone to enjoy, such as a dance. (The photograph here was taken in Albion, and shows members of the Stevens, Gray and Pullen families, at their dance.  Note accordion player.)  Others activities were clearly spectator sports. Have you ever tried to play tennis in a long skirt?  Or in a hat?

Photographs were taken to commemorate these occasions and a sampling of these photographs, plus a few objects such as Mae Johnson’s softball catcher’s mitt, will form the basis of the new exhibit.  Who was Mae Johnson? Mae Elizabeth Johnson was born in 1918 and grew up in Caspar, attending grammar school there and high school in Fort Bragg.  Mae died just last July at the age of 98.  She was one of the “old timers” interviewed by volunteers for the Kelley House, and to date the Museum has accepted and cataloged 49 items donated to us by Mae when she was still living.

The winter exhibit, “Fun and Games: Mendocino at Play,” will be on view to Kelley House Museum visitors beginning January 27 and will continue through March 27.  We have planned two “Sunday Afternoon With . . .” speakers who will share their expertise, as part of this exhibit.  Mark your calendars for Sunday, February 12 to hear Sandra Kearney speak on the Noyo Women’s Rowing Club.  Then, on Sunday, March 12, Steve Cardullo of Westport will discuss the life and times of the “Loggers” of Fort Bragg, and a portion of the story of early baseball here on the North Coast.

The Kelley House Museum is open on Fridays, Saturdays, Sundays and Mondays from 11 a.m. to 3 p.m.