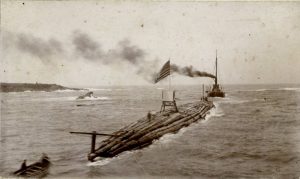 If you read Part I of this topic last week, you know that Fort Bragg is the home of the first Pacific Coast cigar raft. As early as 1889, coastal lumber companies experimented with smaller oceangoing rafts on Big River, and had successfully pulled a 700-foot articulated raft to San Francisco. Eager to increase capacity and further drive down shipping costs, local lumber companies hired leading expert H. R. Robertson, and after a year of activity and anticipation during which local and national newspapers picked up the story, the first Pacific Coast cigar raft was launched.

It broke in two almost immediately.

Robertson was replaced by a Fort Bragg local, James Brett, who was made superintendent of the project. Brett made key design changes. He shortened the raft’s length by 40 feet, tightened its tapered ends, and reinforced the interior with three large, semi-rigid cables. Further, he built the raft in deeper water to aid its launch. The final version was 326 feet long, 34 feet wide and 24 feet deep.

In late August of 1892, the Beacon reported, “At 8:30 Saturday evening, in the presence of a large crowd of people from up and down the coast, the blocking was knocked out from under the raft, and the huge mass of logs started on its downward journey.” Like its predecessor, Brett’s raft slid part of the way into the water and stuck, pinned by its own weight. It wasn’t until the advent of high September tides that the raft actually floated when pulled out to sea by the steamer Noyo.

Upon its arrival in the City, the raft drew crowds who came to see it along the San Francisco waterfront before it was delivered and broken up for milling. Riding high on success, Brett immediately was told to build another raft and the Beacon declared, “Jas. Brett, the builder, is now the master of this new enterprise, and will continue building them for the Union Lumber Company Fort Bragg.”

Possibly jinxed, Brett’s next raft broke up at sea.

In the meantime, Robertson moved to the Pacific Northwest where his rafts were plagued by problems, from marine borers to a succession of structural failures. For a few years, only Fort Bragg locals had succeeded where others failed, causing speculation on the secret of their good fortune. In reality, they planned extensively, employed skilled seamen, and respected the inherent dangers, such as the fact that in rough seas, a raft could overtake and even crush the towing vessel.

Eventually, Pacific Northwest lumber companies succeeded in towing large rafts to San Diego on a routine basis, sending more than one hundred rafts south between the late 1890s and 1941. In that time, only four rafts were lost. As if to come full circle, one of these (a Benson raft) broke up off the Mendocino Coast in 1938 and drifted into Big River, piling the beach with lumber ten feet high. The mill, which had just closed permanently, was reopened and sustained for another eight weeks on this unexpected gift from the sea.