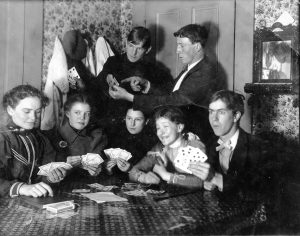 This looks like a sweet group of friends enjoying an evening together and quite obviously posing for the camera. Some look more aware of the presence of the lens than others. The mystery behind this photograph is that we know just enough about it to compel us to want to know more. On the back of the original, from the Kelley House Museum’s archives, a note was written: “This is a flash light taken in Feb. Will Petersen and I are standing up behind.”

It’s very unlikely that we’ll ever find out whom the rest of the group was, or who the “I” was. Unless by one of those ‘History Mystery’ Mendocino miracles, someone contacts us to say that they recognize a grandparent or great-grandparent.

Adding to the intrigue, there is another photograph in the collection, with the same handwriting on the back that states, “This is Will Petersen and I.” In that photograph, the two young men have posed again for the camera, with the same person standing on the right, and the other on the left. A two-man saw rests on a log, and the young man on the right side is raising a liquor bottle toward his lips. That photograph was taken outside. So, very little has changed in that we still get our kicks posing for the camera, whether it was on a tripod, or is contained in a device of 2017.

“Will Petersen and I.” Class clowns? They certainly enjoyed hanging out with their other friends, too, and evidently there was comedic talent to spare in this group of card players.  One can’t help but notice the young man sporting a tie, and seated next to the young lady gleefully showing her teeth.  His eyes are wide open as he displays his hand for the camera lens.  The three other girls hold their cards more discretely, although the second from the left has her eyes trained on something else.  Perhaps she assumed that look of trepidation as part of the pose.

“Will Petersen and I” standing behind have also turned their cards to the camera, and appear to have been caught by the “flash light” in mid-discussion of their hands. Card games, good friends, and a camera on a February evening was one way to find amusement in the old days.  To learn about others, visit the Kelley House Museum during our new exhibit, “Fun and Games: Mendocino at Play,” from now through March 27.  The exhibit includes not only photographs of Mendocino Coast residents enjoying outdoor sports and some indoor games, but also a chance to learn more about our region’s more organized pastimes, such as baseball. The Museum is open to the public Fridays through Mondays, from 11 a.m. to 3 p.m.. For more information, please visit our website at kelleyhousemuseum.org.