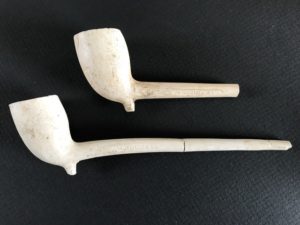 Native Americans introduced the joys of smoking to Europeans and shortly thereafter pipes and their use came into fashion. The clay pipes from the Kelley House collection were essentially disposable. Their stems broke easily. At the time when the fashion was to have stems as long as a yard, if the stem broke, one could continue to use the pipe until another break or two occurred. Pipes were used by women and even children in the earliest decades of their introduction. The smell of tobacco would have disguised the stench of the streets of large cities such as London or Paris. Clay pipes are still made today, and often used by historic re-enactors in places such as Williamsburg and in films such as “Tulip Fever.”

Clay pipes are among the most common and perhaps least understood of the artifacts to have come out of the Kelley House Pond. Through research we know that the majority of the pipes in our collection were made by a firm named “McDougall” in “Glasgow.” These two words were stamped into opposing sides of the stems of the pipes at the time of their manufacture. We also know that McDougall began making pipes in 1846. It is very unlikely that a clay pipe would have found its way to Mendocino and the depths of the Kelley House Pond until after the Pond was constructed, providing us with a date of c. 1880 for their earliest arrival. We also know that after 1891, goods coming into the United States had to have the name of their country of origin displayed on them.  There are McDougall pipes which have “Scotland” stamped on them, rather than simply “Glasgow.” Those pipes are not found in the collection of items pulled out of the Pond. So, for the majority of our clay pipes, we have about a 10 to 15-year period during which they would have arrived in Mendocino, been purchased, filled with tobacco, and smoked.

We don’t know why so many of these pipes ended up in the muddy bottom of the Kelley House Pond, or how many individual smokers they represent. Was this one person indulging in their habit and finding the Pond a convenient place to dispose of the broken pipes? Were they the property of William H. Kelley, as was the Pond? Perhaps they belonged to patrons of a nearby saloon or hotel? The pipes may have been associated with a certain segment of Mendocino’s work force, whether residents or those passing through, such as lumbermen or sailors. There may be a line in an unstudied ledger in our archives that notes the date of the arrival of a crate of pipes, perhaps sold at William Kelley’s store.

In addition to the “McDougall” and “Glasgow” marks, the bowls of several of the pipes are stamped with the initials “T” and “D.” These may have stood for the name of one of the company’s managers, one Thomas Davidson, Jr., or they might carry some other meaning. They are known as “T-D” pipes. Glasgow-made pipes have traveled the world, and have been reported by archaeologists in Australia, Jamaica, Easter Island and Canada. They dominated the market in the later half of the 19th century. Mendocino can join the ranks of locations on the globe where these pipes were smoked, broken and tossed out of sight and out of mind.

The new Kelley House Museum spring exhibit, “Up From Below: Dolls, Pipes & Bottles,” opens on Friday, May 4 and continues through June 18. A special preview for Kelley House members will be held tonight from 4:30-6:00 p.m. with complimentary hors d’oeuvres and wine.