“When Farm to Table was Everyday” Exhibit Opens

“When Farm to Table was Everyday” Exhibit Opens 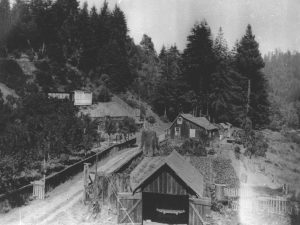 The Kelley House Museum’s new exhibit “When Farm to Table Was Every Day” presents the history of agriculture on the Mendocino coast, from the perspective of putting food on the table.  The exhibit may first be viewed at a “Members Only” reception, Thursday evening, August 25th, from 4:30 to 6:00 p.m. at the Kelley House.  The exhibit will be open to the public on the following day, Friday, August 26th, and will continue during regular museum hours through November 21st.

With the exception of the “Pomo” peoples, who had been feeding themselves with the resources of this region for thousands of years, residents of Mendocino in the 1850s had to either do as the Native Americans had done; bring in their food from somewhere else, or grow their own food.  Our records indicate that many of the early Euro-American residents eventually followed strategies which were a combination of these three possibilities.  The remote character of the Mendocino coast and its interior valleys meant that food initially had to be shipped in.  Having a garden, raising chickens, owning a calf and cow were so much a part of life that these aspects of living were not always recorded by photographs or in diaries.  The raising of food on one’s own place may have been taken for granted as much as we now take our trips to grocery stores.  It was what everyone did. The Kelley House Museum’s archives have yielded a sizeable harvest, nevertheless.

The photograph shown here is of the Piccolotti Ranch, located about 14 miles up Big River, from above, and is a view to the east. It was taken in 1931. The Piccolotti family’s farm was one of two farms used by the Mendocino Lumber Company to feed their logging crews. They farmed in this place for over 40 years and according to our archives, all the vegetables, meat and milk for the cookhouses at the mill and in the camps run by the Mendocino Lumber Company were raised on this and one other farm, run by the Vaughn family.

The Stanford Inn and Ravens Restaurant are a sponsor of this exhibit.