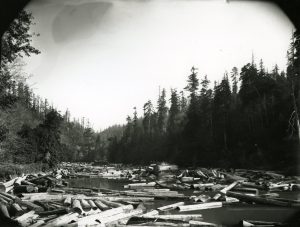 In a recent Kelley House Calendar column on the book “Big River Was Dammed” by Francis Jackson, I wrote a bit about river drives of logs on Big River.  Reading Mendocino County Remembered: An Oral History, which is a collection of oral history interviews of county residents born before 1900 and compiled by Bruce Levene, William Bradd, Lana Krasner, Gloria Petrykowski and Rosalie Zucker, I found a description of such an event on Greenwood Creek.  This is a paraphrased excerpt of what Aldine Gorman said about this logging practice.

Logs were piled, forty feet high, in even, careful tiers.  They weren’t just dumped in the     river…there were dams upstream to collect water.  In the winter or the early spring, after      a really hard freshet, these dams would be opened . . . Logs would rise slowly, begin to          float, start down the river.

Going as fast as fifteen miles per house, the uproar was unbelievable.  Everyone in town would gather on the banks of Greenwood Creek.  We could hear this ferocious roar, a         tumultuous roar, coming down the river.  Then we’d see this river of logs coming along.          Steam rose from the friction rising like a cloud of fog above the logs.

Once in a while a log would jam and river men with log poles and spikes on their boots     would try and loosen the log causing the problem.  If they couldn’t, they might close the   gates on the dams until another freshet lifted the water amount and try again.  Sometimes    there were three or four drives before they could get all those logs down.

I’ve heard about times the logs came out with such speed and such numbers that they       would break the lower dam [the boom] and go right out to sea.  They tell about one time    down in Albion logs were carried out to sea and the current brought them right up into         Little River where they were captured and milled at the sawmill there.  So Albion’s loss            was Little River’s gain (Levene vol. 1, 1976: 178).

Reading “Mendocino County Remembered” at a museum or library offers wonderful stories of what life was like here long ago.  Compiled by local historians and others during the national Bicentennial in 1976, the stories share the life experiences of our ancestors.