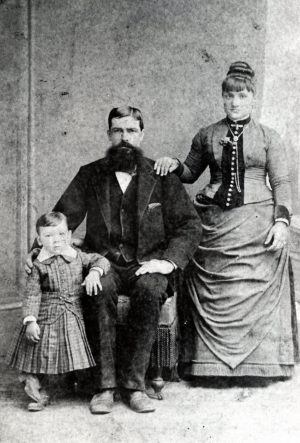 Sunday, June 12th, 2016 the Kelley House presents a talk by Dr. Elmano Costa of California State University, Stanislaus titled “Hooked to America – the Whaling Industry’s Influence on Portuguese Immigration.”  Dr. Costa has been a professor of Teacher Education and the Director of Portuguese Studies at CSU Stanislaus since 1995. Dr. Costa has personal experience as an immigrant, having come to the Central Valley of California from the Azores with his family at the age of ten.

This “Sunday Afternoon With . . .” is offered in conjunction with our exhibit highlighting the story of immigration to the North Coast, “Mendocino’s Mirror: Reflections on Immigration.”

The photograph shown is of the Figaro family, one of many Portuguese families to have settled in Mendocino in the later part of the 19th century.  Both Manuel and Mary were from the Azores, and lived temporarily in Hawaii before settling in Mendocino, where their children were born.  Manuel worked in the Mendocino Lumber Company’s Mill.