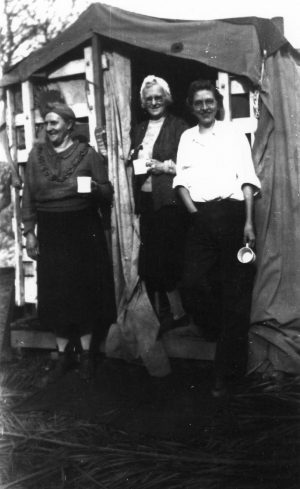 The Aircraft Warning Service (AWS) was a civilian service of the United States Army Air Force Ground Observer Corps begun during World War II to keep watch for enemy planes entering United States airspace. The Kelley House Museum has a few photographs and one archival item to help us remember those days.  This photograph captured the images of Syd Newman, Lena Meshishnek and Faye Lang at the Aircraft Warning Station on Keene Summit, in Comptche.  There was another station located in Mendocino, and others north and south of here.

The United States entered World War II on Dec 7, 1941. Many of those who could not join the military for whatever reason were recruited to the AWS. Statistically, this led to a preponderance of women, many of whom received little recognition for their services. Civilian volunteers were called on to act as airplane spotters. On the west coast, the AWS was under the direction of the 4th Interceptor Command based in Riverside, California.

All observers received extensive training in aircraft recognition. This training was so successful that it spilled over into the general population. Aircraft recognition became a significant hobby providing many with thousands of hours of entertainment and spawning many books and publications, on the subject, including flashcards. Many participated in contests and recognition “Bees”.

Our archives include the identification card belonging to Dudley Blanchard of Little River.  The front of Mr. Blanchard’s card reads as follows:

U.S. AIR FORCE/CONTINENTAL AIR COMMAND/This is to certify that Dudley Blanchard is a fully/accredited member of the Ground Observer Corps/Aircraft – Warning Service

The card is ‘Air Force’ blue in color, and was signed by then California governor, Earl Warren, and by Commanding General, Ennis C. Whitehead.  There is identification data on the back: Mr. Blanchard’s height (5’10”) weight (175 lbs.), eye and hair color (blue and gray, respectively).  Mr. Blanchard’s card number was 3579.

Posts ranged from upper Washington to southern California. Each post had its own code name and number. The code and number for the station in Mendocino was “19 Rose – 5- O.P.”  If aircraft were spotted, the volunteers recorded their observations on forms or in log books and then quickly placed a call to a regional Army Filter Center and verbally delivered a “Flash Message” containing the organized data from the observation. One can imagine that aircraft approaching the coast would be spotted by multiple posts, resulting in multiple “Flash Messages” and, therefore, a reasonably accurate triangulation of position, speed, direction, and altitude.

On the west coast, The National Broadcasting Company hosted a famous 30 minute weekly radio broadcast, “Eyes, Aloft!” that provided AWS information over the air from August 17, 1942 to November 10, 1943, some 61 episodes. Many episodes featured actor Henry Fonda.

The Aircraft Warning Service became inactive on May 29, 1944.

Much of the information for this article was taken from the Wikipedia entry on this topic, https://en.wikipedia.org/wiki/Aircraft_Warning_Service.  If you, or a family member, have any photographs or memorabilia from the North Coast as a home front during World War II, the Kelley House would be interested in preserving it for the future, please visit www.kelleyhousemuseum.org or email curator@kelleyhousemuseum.org.