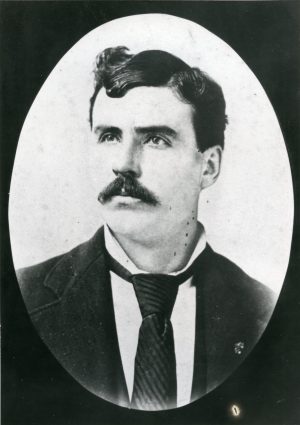 One of the best things about working at the Kelley House Museum is the chance to share a love of history with others, to learn from them, and collectively enrich our knowledge of local lore. Such was the case a few weeks ago when reader David Larkin, Jr. donated a twelve-foot-long section of machine-banded redwood water pipe to the Kelley House in response to our piece, Pipe Dreams, published here in the Beacon. The pipe had been found by his father in 1990 behind the row houses where he was born, and reminds us that there is much more to say on the subject of water pipes and on Horace Fremont Milliken, the father of the Fort Bragg Water Works.

The brother of Dr. James Milliken of Mendocino, Horace left his hometown of Surry, Maine, to travel across country by train, steamer, and stage, arriving in Mendocino in 1874. A handsome and formidable young man of twenty, he worked as a logger for six years, eventually rising to the level of supervisor for the L.E. White Company in Whitesboro.

As he matured, he turned his hand to other things. He ran a successful hardware store on Main Street in Fort Bragg. He bought land in Cucamonga, San Bernardino County, where he raised oranges and Muscat grapes, which were dried and sold locally as raisins. In 1888, he bought land in Fort Bragg; and in 1893, a further 1,200 acres near Pudding Creek where he raised sheep, hogs and cattle. Later, he built a slaughterhouse and a butcher shop to supply the town with meat. Like many locals today, Milliken had a diverse range of talents and the drive to improve his community, but in his notion to bring running water to homes and businesses, he may have found his highest civic calling.

Milliken built the Fort Bragg Water Works between 1889 and 1890 on a tributary of the Noyo River located in Newman Gulch, 2.25 miles southeast of Fort Bragg. Spring fed, his system supplied 225 gallons of water per minute, even during the summer months. Using a thirty-foot-long and seven-foot-high log dam with wood facings, he collected water into a reservoir built on his own land. His system was gravity fed, and his reservoir located at an elevation fifty feet above the town. Water moved through a four-mile network of redwood mains and galvanized pipe.

The original cost to build the Water Works was estimated at $8,000 in 1914 with additional construction adding to a total cost of $9,500. As a pioneer in the use of redwood piping, Milliken learned how long redwood could endure, and had much to contribute on the subject of its longevity. Advertising claims in trade journals of the time testify to the products’ durability, citing the Fort Bragg Water Works as a leader in the region. Later, the city of Fort Bragg acquired the Water Works. As recently as 1989, there were rumors that vestiges of Milliken’s original system were occasionally unearthed, hidden as they are in the bowels of the city.